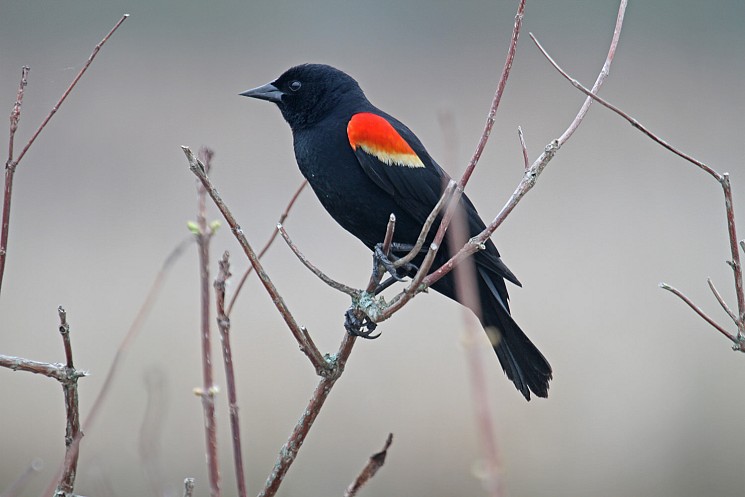 March is a transition month, many of the wintering birds are still about and yet there is a promise that change is on the way. One of my favorite rites of spring is the return of the Red-winged Blackbird. Redwings arrive in early March, the males show up as the days grow longer and it doesn’t matter if there is snow on the ground or ice in the ponds – they will happily perch on a bare branch and bust out in song. The song, so spring, is a loud, gurgled “conk-a-ree”. The males like attention and when they spread their wings and their tails their red epaulets are much in evidence. The females arrive several weeks later and are subdued and cryptic, blending into their nesting habitat.

Their preferred habitat for breeding is a fresh water marsh – Great Meadows National Wildlife Refuge in Concord is the best location in eastern Massachusetts to see and photograph Redwings. At Mount Auburn they can be found at Halcyon and Auburn lakes and at Willow Pond. They successfully nest at all three locations, usually just one pair per pond. Both and male and female birds will let you know they have fledglings in a nest by hovering over you and constantly scolding. They also have to worry about predation from their relative, the Common Grackle which is more common at Mount Auburn and is a frequent egg and fledgling robber.

After nesting, Redwings often join flocks of blackbirds to forage in fields and in some areas of the Deep South, they number in the millions.