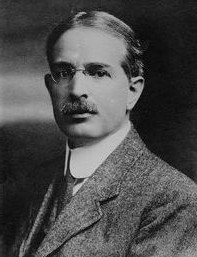 Theodore William Richards (January 31, 1868 – April 2, 1928) was the first American to receive the Nobel Prize in Chemistry, earning the award for his accurate determinations of the atomic weights of 25 chemical elements.

Richards published hundreds of scholarly papers during his scientific career and brought analytical and chemical experimentation to a new level of accuracy.

In 1914 he received the Nobel Prize, however, due to the European war, he was unable to attend the ceremony in Sweden.  He also received many other scientific medals, honors and degrees and served as president of the American Chemical Society (1914).

Born in Germantown, Pennsylvania, Richards was educated at home by his mother, a Quaker poet and author and his father, a noted painter of land and seascapes.  His high intelligence enabled him to enter Haverford College as a sophomore at the age of fourteen, from which he graduated in 1885.  In the fall of 1885 he entered Harvard as a senior and graduated (BA 1886; MA and Ph.D. 1888) with high honors.

After completing graduate work, Richards spent one year as a Harvard traveling fellow in Germany. Later, in May 1896 he married Miriam Stuart Thayer, daughter of Professor Joseph Henry Thayer of the Harvard Divinity School.  They had one daughter and two sons.

In 1912 Theodore became the Erving Professor of Chemistry and Director of the Wolcott Gibbs Memorial Laboratory, positions he held until his death in 1928.  On page 98 of Determinations of Atomic Weights, he stated: “When mankind discovers the fundamental laws underlying any set of phenomena, these phenomena come in much larger measure than before under his control.”

While best known for his revisions to atomic weights of the elements, the last 25 years of his scientific career revolved around thermo-chemistry and thermodynamics.

Richards died in Cambridge on April 2, 1928.  A Swedish postage stamp in his memory was issued in 1974 by the Nobel Foundation. He is buried in Lot # 221 on Willow Avenue. Also buried there is Richards’ son-in-law James B. Conant, (1893-1978) a student of Richards at Harvard and later president of Harvard from 1933-1953.  A large family monument stands in the center of the Thayer family lot where Richards shares a memorial with his wife.

Below you will find a link to A Biographical Memoir of Theodore William Richards, by his son-in-law Harvard President James Bryant Conant.  Biographic Memoirs Volume 44 contains the biographies of deceased members of the National Academy of Sciences and bibliographies of their published works. Each biographical essay was written by a member of the Academy familiar with the professional career of the deceased.