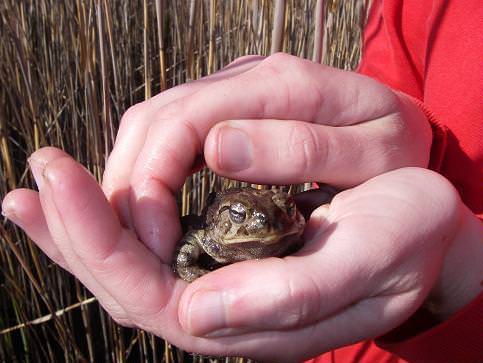 Mount Auburn Cemetery is renowned as both the first garden cemetery to be established in the United States (consecrated in 1831) and as a birding hotspot (this past Spring a pair of nesting great horned owls with their two fledglings created quite a stir). Besides birds, other wildlife inhabiting the cemetery includes coyotes, foxes, painted turtles and bullfrogs. This is especially impressive when one considers that its location lies within both Cambridge and Watertown.

Over the past two decades the Cemetery administration has been committed to improving wildlife habitat on the grounds through plantings of native groundcovers, bushes and trees with the intent of attracting more wildlife to the cemetery. More recently, the administration has agreed to a project, initiated through a citizen-scientist proposal by Joe Martinez (New England Wildlife Center’s outreach educator) and Patrick Fairbairn (a member of the Watertown Conservation Commission), to attempt a repopulation of the grounds with American toads, gray treefrogs, and spring peepers.  Each of these amphibian species was undoubtedly present in the cemetery at its inception; their disappearance from the cemetery is probably due to earlier landscaping practices that eliminated suitable habitat for the juveniles and adults.

The project is beginning with the American Toad. Over a three year period (that began this year) a specified number of toad tadpoles will be collected each Spring from two locations near Boston and released into a vernal pool at the cemetery.  One of those locations is the rainwater retention pool at the New England Wildlife Center. In the five years since its creation wood frogs, spring peepers, and American toads have migrated in from the adjacent wetlands to breed there. When approached by Joe, Dr. Greg Mertz graciously agreed to volunteer NEWC as one of the donor locations.

Moving any Massachusetts amphibian from one location to another with the intent of establishing a new population requires permission from the state Fish and Wildlife Department, therefore a Massachusetts Fish and Wildlife scientific collecting permit was obtained. In addition, permission was needed from the Watertown Conservation Commission (as the release site within the cemetery lies within Watertown).

This past May (2011) the first tadpoles were collected from the retention pond and transported to the cemetery.  The tadpoles began metamorphosing in late June and have already been seen over twenty yards from the vernal pool. Should any survive into adulthood they will return to the vernal pool to breed. If all goes well, in 3-4 years, the melodic sound of trilling American toads will add yet another wildlife element for visitors to enjoy at Mount Auburn Cemetery!

In a few years toads the size of the one photographed above may be living at Mount Auburn Cemetery!

Article by and photo courtesy of Dr. Joe Martinez, Ed.D.