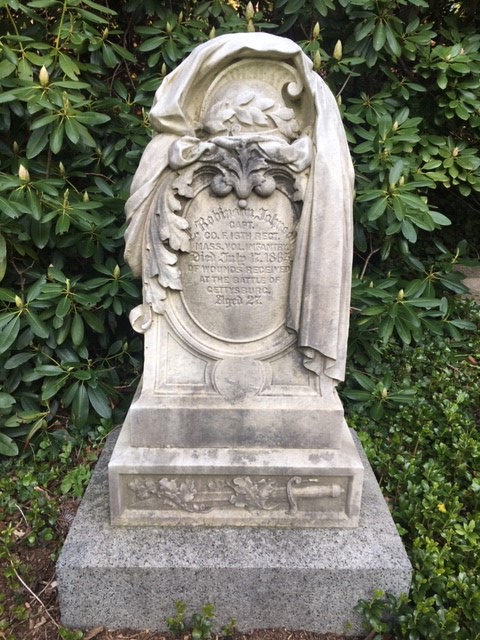 Originally known as Decoration Day, Memorial Day originated in the years following the Civil War. With military and non-military deaths totaling an estimated 750,000 people, Americans had to contend with death on a larger scale than ever before. As people across the country sought ways to honor those who died in the conflict, the decoration of soldiers’ graves became a frequent form of commemoration.

There are 928 documented veterans who served in the Civil War in a military or non-combative capacity and who are buried or commemorated at Mount Auburn. Each of their monuments tells the story of the enduring contribution that Massachusetts citizens made in the Civil War. Today, more than half of the Cemetery’s monuments associated with the Civil War are in need of care. We are pleased to announce that the Friends of Mount Auburn Cemetery recently received a Veterans’ Heritage Grant of $8,250 from the Commonwealth of Massachusetts for a $16,000 project to conserve twelve of our most historically significant veterans’ monuments.

Civil War monuments have universal iconography, yet are often a highly personal form of commemoration that reflects the realism of the time. This personalization is well illustrated in the marble memorial to Captain Charles Robinson Johnson, which features an unusual combination of an ornate headstone covered with a marble shroud symbolizing mourning, an acanthus leaf symbolizing enduring life, and a carved artillery sword that was likely based on Johnson’s own. The inscription on the monument reads: “C. Robinson Johnson, Capt. Co. F. 16th. Regt. Mass. Vols. Inf. died July 17, 1863 of wounds received at the battle of Gettysburg, aged 27.”

In August 1861, 25-year old Johnson volunteered in the 16th Mass Regiment organized in North Cambridge. He served in the Peninsular Campaign and saw action at many battles, including Malvern Hill; Manassas; Fredericksburg; Chancellorsville, where he was wounded; and Gettysburg, where he was wounded three times but raised himself and got away. After Gettysburg, he was returned to Boston to his wife and son only to succumb to his injuries four days later. His family carefully preserved his letters, which then inspired authors Albert Eisenberg and Michael Hammerson, who wrote about them in their 2015 book: If I am alive next summer: The Civil War Letters of Captain Charles Robinson Johnson of the 16th Massachusetts Infantry. Little had been written about the 16th, known as “The Iron Sixteenth,” but the authors were able to access the material they needed through Johnson’s letters. Many others who served the 16th and fell in battle are also buried at Mount Auburn.

Monuments such as the memorial to Captain Johnson have suffered from over 150 years exposure to the harsh New England climate. Without preservation, the stones will deteriorate, and their inscribed stories will be lost. Crucial conservation treatment will stabilize the stones, preserve the sculptural elements and inscriptions, and ensure the long-term survival of these cultural artifacts belonging to Civil War history.

Please help us raise the remaining funds needed to support the preservation of Mount Auburn’s veterans monuments with a gift to Monument Preservation. Thank you!