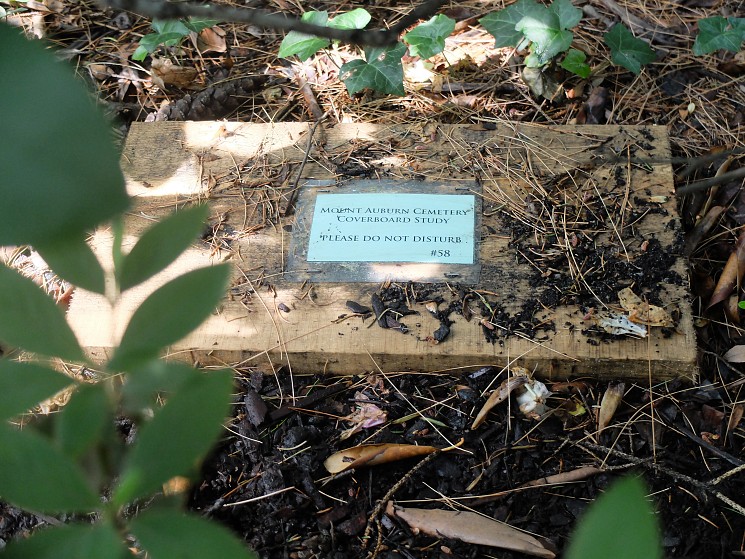 Coverboard studies are an excellent way to determine the presence or absence of species of amphibians and reptiles without disturbing natural habitat. With this in mind, a coverboard study was initiated at Mount Auburn Cemetery in the spring of 2013 and will be continued through the fall of 2015.  This project is part of a comprehensive Wildlife Action Plan. Specifically, this study was designed to search for the presence of Eastern Red-backed Salamanders (Plethodon cinereus). This lungless salamander has been found to be the most abundant vertebrate in the forests of New England. The biomass of these salamanders is twice that of all the breeding birds in a forest. Positioned in the middle of the food web, these salamanders are important as both predators of soil invertebrates and as prey for larger vertebrates such as birds, snakes, and small mammals. As top-level predators of the forest floor Eastern Red-backed Salamanders have been shown to have a significant role in slowing down soil decomposition, thereby increasing the amount of carbon stored in the soil. A population of Eastern Red-backed Salamanders has been observed at the Shady Hill School, located along the northeastern boundary of Mount Auburn Cemetery.

A secondary goal of this study was to gain insight into the dispersal of Spotted Salamanders and American Toads throughout the Cemetery.

May 1, 2013
Twenty-five coverboards (12″ x 18″ x 1″ untreated, rought-cut Eastern Hemlock boards) were set out around Consecration Dell to search for terrestrial amphibians and reptiles.

June 16, 2014
Some  of existing coverboards were relocated to areas along Lime Avenue and west of Mountain Avenue.

April 28, 2015
Twenty-five additional coverboards (12″ x 18″ x 2″ untreated, rough-cut Spruce boards) were set out in ten additional areas throughout the Cemetery including along the banks of Auburn Lake, Halcyon Lake, and Willow Pond.

Coverboards have been monitored following rain events throughout 2013, 2014, and the spring of 2015. To date, the only observation of amphibians or reptiles was one observation of three juvenile Spotted Salamanders under a coverboard at the bank of the Dell Pond.

This project is being conducted by Brooks Mathewson and Joe Martinez as part of Mount Auburn Cemetery’s Wildlife Action Plan.