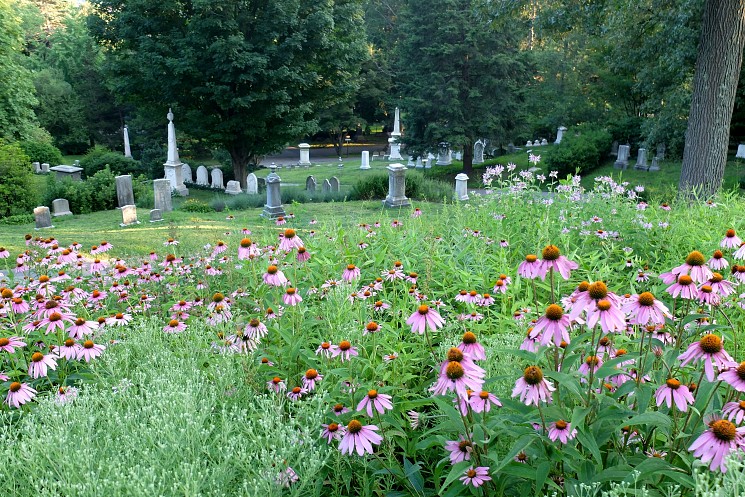 Given the increasing urbanization of much of North America, models for successful urban wildlife refuges are desperately needed. Wildlife refuges in proximate to densely settled towns and cities are of particular importance as places where people can learn about and actively participate in conservation projects within their own communities. In 2014 Mount Auburn convened a variety of experts*–landscape architects, wildlife experts, and conservationists–to both evaluate Mount Auburn’s previously completed habitat improvement projects and to identify future initiatives that would further the Cemetery’s goals of creating a more healthy and balanced ecosystem.

Resulting from this collaborative effort is Mount Auburn’s Wildlife Action Plan. This “mini master plan” has identified broad initiatives that further Mount Auburn’s commitment to protect and enhance wildlife habitat within its 175 acres and to more actively engage the public in its ongoing efforts. Learn more about these initiatives and the projects now being implemented that support these broader goals below.

>> Assess the current populations of aquatic and terrestrial amphibians and reptiles, fish, birds, and mammals inhabiting the Cemetery

>> Improve the health and quality of Mount Auburn’s water bodies

ASSESS THE CURRENT POPULATIONS OF AQUATIC AND TERRESTRIAL AMPHIBIANS AND REPTILES, FISH, BIRDS, AND MAMMALS INHABITING THE CEMETERY

Assessment of Aquatic Amphibian, Reptile, and Fish Populations
To create the baseline data needed to determine species presence and abundance within Mount Auburn’s ecosystem this project began in 2015-2016 with the trapping and release of aquatic species. As part of the first phase, large hoop traps and smaller minnow traps were deployed and checked at regular intervals allowing species to be examined for health, counted, and marked (when appropriate) to ensure accuracy in the assessment. In 2017, acoustic monitoring devices (song meters) were attached to trees near all four of the Cemetery’s waterbodies to record amphibian and bird calls (in collaboration with Mass Audubon) to further aid in population assessments.
Project Leader: Bryan Windmiller, Ph.D., Grassroots Wildlife Conservation

Assessment of Terrestrial Amphibian and Reptile Populations
Coverboard studies were initiated to determine the presence or absence of species without disturbing natural habitat. Forty-one boards of rough-cut and untreated Eastern Hemlock or Spruce were placed on slopes and under trees and shrubs within the Cemetery.  Surveys conducted at regular intervals determined which species were taking advantage of the desirable cover provided by the boards. Amphibians and reptiles were examined for health and their locations were documented to determine dispersal range.
Project Leader: Brooks Mathewson, M.F.S.
Learn more about the Coverboard Project>>

Spotted Salamander Assessment
A project to monitor the Spotted Salamander was implemented in 2016-17 to assess the population of this native amphibian in its breeding ground at Consecration Dell.
Project Leader: Joe Martinez, Ed.D.

Assessment/Development of Bird Monitoring Protocols
In 2016, the Massachusetts Audubon Society implemented the first year of a 3-year pilot project to monitor migrant and breeding bird populations at Mount Auburn. As part of this project, a point count survey is being conducted from nine locations throughout the Cemetery.
Project Leader: Amber Carr, Massachusetts Audubon Society

Native Aquatic Amphibian Reintroduction Project
This project was undertaken to establish breeding populations of three native amphibian species that did not exist at Mount Auburn for at least twenty years prior to 2010. Tadpoles collected from sites in eastern Massachusetts were released in the vernal pool at Consecration Dell.  As the metamorphosed species have left the water and moved to upland terrain, their dispersal throughout Mount Auburn has been tracked by conducting counts of individuals and also through the use of audio monitoring systems, or song meters, used in conjunction with the aquatic species population assessment. During 2016, the last of the three-year reintroduction cycles to restore breeding populations of native amphibians was completed, with the final release of Gray Treefrog tadpoles. The mating trills of the American Toad were heard at Halcyon Lake and choruses from Spring Peepers were heard at Consecration Dell. Egg masses, tadpoles, and metamorphs were observed at both water bodies. Juvenile and mature species were documented all over the Cemetery. Extreme drought conditions in 2016 may have impacted breeding and metapmorph survival, requiring further monitoring in 2017.
Project Leader: Joe Martinez, Ed.D.
Learn more about the Native Amphibian Reintroduction Project >>

Native Eastern Red-Backed Salamander Project
The reintroduction of the Eastern Red-Backed Salamander began in 2016-17. Red-backs differ from other salamanders in that they spend their entire lives on land. Mount Auburn represents and ideal habitat and there are sizable populations within close proximity of the Cemetery already.
Project Leader: Brooks Mathewson, M.F.S.

IMPROVE THE HEALTH AND QUALITY OF MOUNT AUBURN’S WATER BODIES

Willow Pond Rain Garden
Located on the edge of Willow Pond, the rain garden was designed to slow the velocity of storm water input into the pond; capture harmful, nutrient-laden sediment; and protect water quality. During rain events, the captured water will slowly rise and flow over a stone weir into the existing bio-filtration pool that is inside of the pond. Installed in 2016, the new garden also improves habitat for amphibians, reptiles, birds, and invertebrates.
Project Design: New England Environmental, Inc.
Learn more about the Willow Pond Rain Garden >>

Comprehensive Pond Assessment
The Cemetery began a comprehensive assessment of its ponds their associated aquatic bank plantings in 2017. The monitoring will focus on identifying stressors to habitat brought on by climate disruption. Following the assessment, the Cemetery will implement measures to improve water and habitat quality and create resiliency at all four water bodies in periods of drought and inundation due to severe storms.
Project Leaders: Scott Fisher and Andy Bohne, New England Environemental (SWCA)

Washington Tower Wildflower Meadow
In order to maximize the habitat value of the sunny hilltop meadow surrounding Washington Tower, the existing grassland was replanted in 2015 with a diverse selection of herbaceous perennials, ornamental grasses, and woody plants designed to attract pollinators such as butterflies, bees, and hummingbirds. The Butterflyweed (Asclepias tuberosa) is especially significant for its function as a larval host for the Monarch Butterfly.
Project Design: Larry Weaner Landscape Design Associates

Citizen Science Phenology Study
Each year, Mount Auburn attracts multitudes of migratory and year-round resident birds, who are attracted to this urban wildlife refuge especially by our wide-ranging horticultural collections. To collect data on the phenology (leaf, flower, and insect emergence) of various species of trees and shrubs that birds rely on for food and shelter, Mount Auburn launched a citizen science program in 2016. Following specific tranining, volunteers are tasked with documenting their observations at specific locations througout the Cemetery on a weekly basis. As we are concerned about the potential impact of climate disruption and severe weather on the habitat and the wildlife it supports, the citizen science program helps us both get the “big picture” about the plants that support bird populations at Mount Auburn and raise awareness of the issue in the local community.
Project Leader: Paul Kwiatkowski, Conservation & Sustainability Manager (Mount Auburn Cemetery)
Phenology Specialists: Brooks Mathewson M.F. S. and Jim Gorman, Visitor Services Assistant (Mount Auburn Cemetery)

Citizen Science Microclimate Study
Mount Auburn expanded its citizen science program in 2017 with the addition of a micro-climate study. A mircoclimate refers to the climate of a small, defined area that differs from that of the larger, surrounding area. Slope, wind, soil conditions, water holding capacity, and sun exposure are all factors that impact a microclimate. For this study, our team of citizen scientist volunteers will collect ambient, dew point, and ground surface temperature readings as well as relative humidity readings at specified locations  throughout the Cemetery. Data from the Cemetery’s weather station (located at our Operations Center) is also being recorded for comparative analysis. The data collected will aid in the identification of the Cemetery’s discreet micro climates, which in turn will help us to make better plant selections for these locations in the future.
Project leader: Paul Kwiatkowski (Mount Auburn Cemetery)

Integrating Ecological Process and Citizen Science
In 2017, Mount Auburn began a two-year collaboration with Lesley University to further our goals of developing the Cemetery into a “living laboratory.” This project, coordinated by an “Educator in Residence,” will include the creation of self-led tours and lessons that can be utilized by summer camps, after school programs, clubs, and local class rooms. The lessons created by Lesley faculty will highlight the on-going projects being implemented as part of the Wildlife Action Plan as well as additional research being conducted by Lesley faculty on urban bats, ants, pollinators, aeromatic compounds, and other natural history projects.
Project Leaders:  Susan Rauchwerk and David Morimoto, Lesley University

*The Wildlife Action Plan was created in collaboration with:

Funding for the Wildlife Action Plan was provided in part by the
A. J. and M. D. RUGGIERO MEMORIAL TRUST.

Ultimately, the task of preserving the Earth’s current biodiversity will depend most on the degree to which people value that diversity.