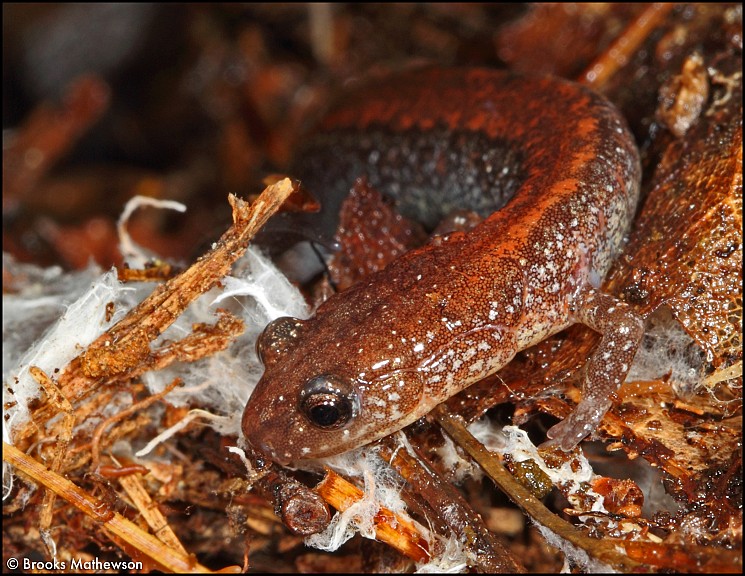 Mount Auburn provides critical habitat for a variety of animals. Amid urbanization and loss of open green space, the Cemetery can play an important role in bringing them back to the Boston area. This year, we are thrilled to see the successful return of another native species to our landscape. Ecologist Brooks Mathewson has been working since 2017 to reintroduce one of the most ecologically-important animals of the New England forest to Mount Auburn, the eastern red-backed salamander.

According to Mathewson: “Red-backs are critical top-level predators of forest floor invertebrates. These ‘wolves of the forest floor’ prey on the organism that shred leaves thereby slowing down leaf litter decomposition and helping to keep more carbon permanently stored in the organic layer of the soil. This is significant given that twice as much carbon is stored in the soil of healthy forests as in the plants and animals above.” With that in mind, bringing back a thriving population of red-backs is going to be extremely important for the sustainability of our woodlands.

This year, Mathewson has found that not only is their population well-established in Consecration Dell, where he originally released them, but it is now spreading across the Cemetery’s landscape as well. Mathewson is continuing to monitor their population and is also planning to release an additional 50 red-backs from forests in Central Mass. in the coming months.

We need your help to support the incredible scientists like Mathewson who work to make Mount Auburn a thriving habitat for this growing diversity of wildlife. Please make a gift to our Wildlife Action Plan today. Thank you!

About the Author: Anna Moir