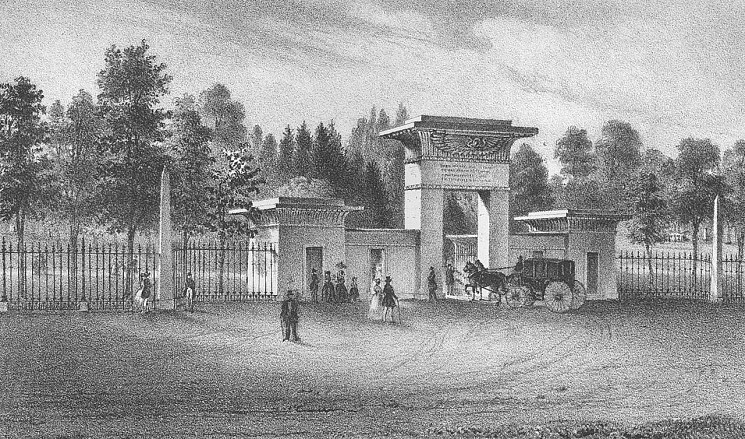 In 1832, one year after its founding, Mount Auburn built its first structure, the Egyptian Revival Gateway.  Designed by one of the Cemetery’s founders, Dr. Jacob Bigelow (also the designer of Bigelow Chapel and Washington Tower), the Gateway was constructed of wood that was painted gray and dusted with sand when it was still wet so as to give the appearance of granite.  The faux granite structure, which cost $1,366, did not appeal to everyone.  And so, ten years later, in 1842, it was rebuilt of Quincy granite by Octavius T. Rogers for $9,535.  Rogers was chosen for the job because he was the only contractor who was willing to undertake both making and placing the gateway’s carved cap (or cornice stone) in a single piece.  This cornice stone is thought to be the largest piece of carved granite placed in a built structure in the United States at that time.  The Rogers quarries supplied and cut the granite blocks, which they transported on barges via the Charles River and then by oxen to Mount Auburn.

Upon completion, Mount Auburn’s Gateway immediately assumed special significance as the first fully created Egyptian Revival structure in the United States and the first complete Egyptian Revival design for an American cemetery.  Because of this, it was widely copied by other cemeteries, including the Old Granary Burying Ground in Boston (1840), Cypress Grove Cemetery in New Orleans (1840) and Mount Hope Cemetery in Rochester, NY (1838, no longer standing).  The entrance also came to be an iconic symbol of Mount Auburn.  So much so in fact, that the public could find representations of the Gateway on china, stationery, postcards, guidebooks, and photographs.  In the early days of the Cemetery and before the invention of photography in 1839, prints were especially critical in cementing the Gateway’s image in the public’s imagination.

Dr. Bigelow’s decision to chose the “Egyptian Style” and Egyptian symbolism as the Gate’s dominant motif was likely due to immense public fascination with ancient Egypt at the time- having been ignited by Napoleon’s campaign into the country.   The Gate’s height is 25 feet, and the whole length, including the lodges, is 60 feet.  Carved into the cornice, is a winged globe.  Bigelow reported that he took the design for the Gate from “some of the best examples in Denderah and Karnac”.  He believed that he needed to address concern that visitors might be offended by the Egyptian practice of placing a serpent or crocodile head on the sides of the globe.  So instead, he chose to replace the “offending images” with a drooping lotus.  On each side of the 25-foot-gateway, are positioned two obelisks connected to lodges by a fence.  The obelisks, the foliage of the cornice, and winged globe all eventually became popular Egyptian iconography of the time. On the outside of the Gate is this inscription:

THEN SHALL THE DUST RETURN

TO THE EARTH AS IT WAS

On the opposite side [facing into the Cemetery]: Originally, carriages entered through the central portal and pedestrians through the entrances on each side where lodges for the gatekeeper and superintendent were located.  Over the years though, minor changes have been made to the Gateway that have helped adapt it to decades of ever-changing technology and culture, as well as helping to preserve its relevance.  It is because the Gate preserves such a high degree of integrity that it is probably the most widely recognized symbol of the Cemetery.  Below are examples of the minor changes that the Gateway has undergone:

*  Turnstiles were added in 1908 to the Gate’s sides
*  In 1913 gated entrances were added to each side to provide entrances for automobiles.
*  The Gate’s alcoves were roofed over with granite in 1861 and some minor modifications were made to doorways

In many ways, the Gateway represents the passage between two worlds – from the city of the living outside the Cemetery, to the peaceful, “silent city of the dead” within.  Just as Mount Auburn was a new American landscape, its Egyptian Revival Gateway was the first of its kind in an American cemetery and it quickly became an iconic model which inspired other cemeteries throughout the country.  Mount Auburn continues to incorporate the Gateway into everyday functions of the Cemetery by maintaining it as the main entrance, making it the initial gathering point for guided tours and by installing literature racks and an interactive kiosk in its east alcove.  Though it has seen many changes over the years, Mount Auburn Cemetery has maintained this historic Gateway for 181 years, and will continue to ensure that it is preserved for future generations.  In fact, the Gateway is currently included in a large project that aims to revitalize the Cemetery’s historic entryway as a whole.  Efforts to restore the historic integrity of Story Chapel’s original porte-cochere culminated in the completion of the Story Chapel Entryway Project in 2012.  This, along with other projects to preserve the Cemetery’s entryway serve as important stepping stones on the road to ensuring that the Gatehouse forever remains a symbol of Mount Auburn’s strength and perpetuity.