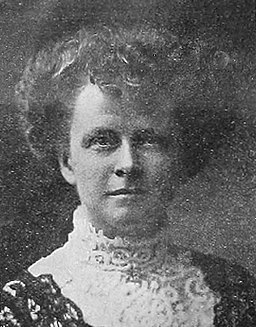 Best known as the Author of Pollyanna, Eleanor Porter was born in Littleton, New Hampshire.  She was the daughter of Francis Fletcher Hodgman and Llewella French Woolson Hodgman.  Her mother was a descendant of Governor William Bradford of the Plymouth Colony, and her father was a druggist.

Eleanor attended public schools, but due to ill health left high school and continued her studies under private tutors.  Early on she pursued a career in music but at a young age she also showed signs of talent in writing.  She studied voice privately in Boston, attending the New England Conservatory of Music, and sang in church choirs, concerts and gave private lessons. In addition to teaching music, she was a member of the Congregationalist Church and active in a number of organizations, including the Daughters of the American Revolution and the Boston Author’s Club.

In 1892, she married John Lyman Porter, a Corinth, Vermont businessman who became president of the National Separator and Machine Company.  During the next ten years, the couple lived in several different locales, including Chattanooga, Tennessee, New York City and Springfield, Vermont.  They then moved to Cambridge, Massachusetts where they lived with Eleanor’s invalid mother.  They had no children.

The year 1901 marked a turning point in Porter’s life.  She gave up music and became a writer, the work for which she is most celebrated today.  Her first novel Cross Currents, published in 1907, did fairly well.  Her second Miss Billy released in 1911 attracted an even larger reader-ship.  Yet her most popular work was undoubtedly her third novel Pollyanna, published in 1913.  The eighth on the bestseller list that year, it then jumped to second in 1914.  Even its 1915 sequel, Pollyanna Grows Up, was fourth on the bestseller list.  Her next four novels published from 1916-1920 were all in the top ten as well.  Over the course of her career she wrote 16 novels in all.

Pollyanna was translated into eight languages, became a play in 1916 and a motion picture star-ring Mary Pickford in 1920. Walt Disney also produced the movie Pollyanna starring Hayley Mills in 1960.  The “Pollyanna” name was also given to commercial products including a game.  By 1917, Porter’s publishers had trademarked the word “Pollyanna” and “Glad.” They issued a “Glad Calendar” for recording good deeds along with the Pollyanna Annual: The Yearly Glad Book (1917).  After her death, the same character continued in the children’s books of Harriet L. Smith and Elizabeth Borton, adding to the “Pollyanna” readership.

Although her novels were essentially sentimental works of fiction, Porter, with her journalistic eye, wrote profound social commentary by including contemporary muckraking themes. For example, Cross Currents deals with child labor; Pollyanna, with insincere and over-planned women’s charity associations; Pollyanna Grows Up, with slum-lords; and Mary Marie (1920), with divorce. Porter’s unique achievement has been described as, “A compromise between reform and gentility, between gentility and democratic leveling.” (DNAW)  Her readers enjoyed her optimistic tone and how, without preaching or moralizing, she encouraged faith in Christian virtues and a democratic outlook.

Her literary career ended when she developed pulmonary tuberculosis at age 51. She died soon after in her Cambridge home.  Her short stories were collected and published in the five years after her death.

Of note, the impressive 22-foot-tall monument that memorializes her life is constructed of pink Georgia marble.  The inscription on the dark bronze tablet reads: “In Memory of Eleanor H. Porter, who by her writings brought sunshine into the lives of millions.”  Beneath these words lies a beautiful carving of a writer’s open parchment and quill pen, and above them the emblem of a torch enclosed by a wreath, perhaps symbolizing an eternal flame and victory over death.  She is buried alongside other members of the Hodgman family and next to her husband John Lyman Porter.

Adapted from the research of Judy Jackson and Laura Gosman as published in Mount Auburn Cemetery’s Person of the Week: Eleanor Hodgman Porter, 2000.