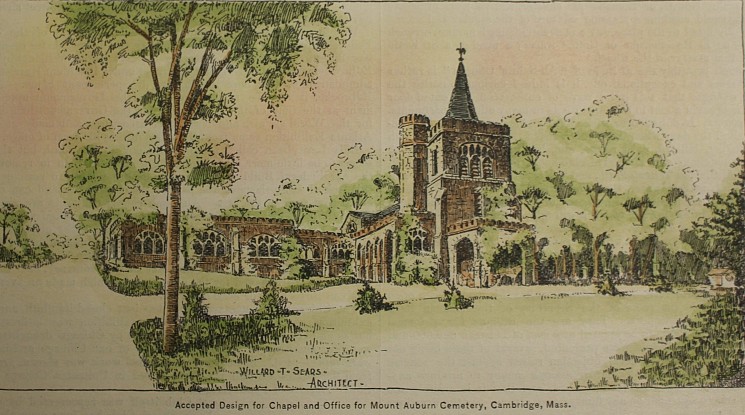 The first thing you see when you pass through the entry gateway of Mount Auburn Cemetery is Story Chapel and the adjoining Administration Building. Since 1898, the old stone building has provided a setting for funeral and memorial services; a meeting place for public programs and events; and offices where staff have carried out the work of cemetery services, and of preservation and cultural activities related to Mount Auburn. Masonry work, structural repairs, and major renovations on the interior and exterior of the building have been taking place since 2017. The multi-phased project gives us pause to reflect on the significance of the building in Mount Auburn’s history.

Decision to Build a New Chapel and Office

Construction on the original red sandstone structure started in 1896 and was completed in 1898, during a time when Mount Auburn was experiencing significant growth.[i] Bigelow Chapel, Mount Auburn’s first chapel erected in the 1840s and 1850s, had served the Cemetery for half a century. Increasing complaints about the building, however, included insufficient space for funeral services, no cellar or robing room, and poor heating. Bigelow Chapel’s challenging acoustics, as reported in a Mount Auburn Annual Report, became evident in the form of a “disagreeable echo, which interfered with the voice of the officiating minister and rendered choir singing impracticable.”[ii]

In 1895, a special committee appointed to investigate the renovation of Bigelow Chapel concluded that refurbishing the building would be equal to the cost of constructing a new structure.[iii] In addition, more space was needed for the Cemetery’s growing administrative staff. The committee recommended to the trustees the “construction of a new Chapel, and at the same time, and in connection therewith, a building for the offices of the Corporation. . . . By connecting the two buildings, both can be more conveniently and economically heated, and cared for.”[iv] The cost of construction totaled approximately $68,000.[v]

The trustees expressed their desire for a style of building in keeping with the other architectural landmarks within the Cemetery including the Egyptian Revival Gateway and Bigelow Chapel. A design competition included plans submitted by the architectural firms Longfellow, Alden and Harlow; Coolidge and Wright; G. Wilton Lewis; and Willard Thomas Sears.[vi] Sears, the chosen architect, designed the Old South Church in Boston’s Copley Square (1873), and was currently working with Isabella Stewart Gardner on Fenway Court, the home of Mrs. Gardner that later became the Isabella Stewart Gardner Museum (1900-1902). [vii] Sears would also oversee the interior renovation of Bigelow Chapel in 1899 for the installation of a new crematory.

Sears chose red sandstone quarried in Potsdam, New York for the construction of the Chapel and administrative offices.[viii] The stone was understood to be weather resistant and harder than granite, yet easy to carve. It was also known for its variegated colors that ranged from red to pink. Mount Auburn’s Annual Report noted that Potsdam sandstone “is a very hard stone and does not readily absorb moisture, and the color is very agreeable and pleasant to the eye. The buildings will be practically fireproof, built in the most durable manner.”[ix]

Israel Spelman, President of Mount Auburn during the time of the building’s construction, described Sears as “unremitting in his superintendence and personal attention.” [x] For the “New Chapel,” as the building was initially called, Sears explained, “The English perpendicular style of architecture as exemplified in many of the English parish churches built during the early part of the fifteenth century has been adopted.”[xi] The English gothic style was characterized by arches in the ceiling, large windows, and vertical lines in the paneling and window tracery (the support between sections of glass).

In the New Chapel, Sears placed Indiana limestone tracery along the windows and the interior wall between the nave (central part of the chapel) and the cloister (hall) running along the north side of the building. In 1929, the architectural firm Allen and Collens oversaw the installation of leaded and stained glass windows in the nave and the chancel (area near the altar). For the nave, the studio of Wilbur H. Burnham Sr. created gothic revival windows representing the medieval tradition that was favored by Burnham. The figures of Christ and angels are portrayed in the large chancel window above the altar and are signed by the Boston artist Earl E. Sanborn. While the symbolism is Christian, Sears designed the Chapel “to meet the requirements of all religious denominations.”[xii]

The interior walls were constructed with Pennsylvania golden bricks and laid in yellow mortar. The Chapel featured carved wooden hammer beams (horizontal supporting beams) with decorative angels, each holding a shield; carved wooden pulpits (elevated stands for speakers); and a total of 22 pews, 11 on each side of the aisle. All were made of Florida gulf cypress that reflect the Arts and Crafts aesthetic, and the woodwork was stained and rubbed down to achieve a flat oil finish. Together the pews and balcony, accessible by a stairway from the front vestibule, offered seating for 175 people, more than twice that of Bigelow Chapel. An organ chamber housed a Hutchings organ, which was replaced in 1925 with a Hook & Hastings model.[xiii] The vestry provided an office and changing room. A room near the Chapel entrance received caskets for funeral services. Unlike Bigelow, the New Chapel also had electricity.

Visitors entered the New Chapel on Central Avenue through a porte-cochere (covered porch). For the exterior, Sears designed a square three-story belfry (bell tower) with a turret and a spire (removed in 1935). Flat roof areas were covered with copper and the pitch roofs with slate. A sundial mounted on a tablet made from Indiana limestone was placed on the southern exterior of the building. Henry Ingersoll Bowditch acquired the bronze sundial from its previous owner Dr. Benjamin Waterhouse, a professor of medicine at Harvard Medical School. The tablet is carved with ivy leaves, and clusters of engraved ornamental leaves surround the sundial. Bowditch’s son remembered that “My father . . . asked his friend, the poet John G. Whittier, for an appropriate verse to be engraved upon the [tablet].”[xiv]

The 1899 Annual Report observed, “The chapel . . . is furnished with every modern convenience and improvement, and the humblest as well as the most costly and expensive funeral services can there be satisfactorily performed.”[xv] The first funeral occurred on June 18, 1898, and 58 services took place in the first year. [xvi] In 1936, the New Chapel was named Story Chapel after Justice Joseph Story, one of the Cemetery’s founders and its first president.

In 1987, renovations in Story Chapel created improved space for lectures, events, and exhibits. The Visitors Center, located at the entrance to the Chapel, opened in 2008. In 2012, McGinley, Kalsow, & Associates built a new porte-cochere out of reclaimed southern yellow pine and created a more accessible and inviting entrance to the Chapel.[xvii]

Administration Building
The original design of Willard Sears included enclosed cloisters along the north wall and a passageway in the basement that connected the Chapel to the office (which became known as the Administration Building around 1900). There were staff offices on the first floor and basement as well as two fireproof storage vaults for safe storage of Cemetery records. The building provided a superintendent’s office, a meeting room for the trustees, and a business office for a bookkeeper and clerks.[xviii]

The office featured a center rotunda area that exhibited full-length marble statues of John Winthrop, John Adams, James Otis, and Joseph Story. The statues were moved from their previous location in Bigelow Chapel to be displayed in this new setting. In the 1930s, to create more office space, the trustees donated the four statues to Harvard University. [xix] In 1990, Ann Beha Associates renovated the interior in a way that modernized the office space and preserved the structure’s historic features. The skylight in the original rotunda used to display the statues, for example, was replaced with a lantern shaped light that brought natural light into the new offices.

A climate-controlled storage room was built on the lower level to preserve and increase longevity of the Cemetery’s historical collections and archives. In 2015, the family room and conference room where visitors first enter the Administration Building were redecorated. Today, Mount Auburn staff continue to carry out administrative, cultural, and preservation activities related to the Cemetery and to provide essential cemetery services.

When Story Chapel and the Administration Building were completed in 1898, the local press provided extensive coverage about the new structure. The Cambridge Chronicle wrote, “Externally, the chapel is replete with characteristic points of Gothic architecture. Window arches, buttresses, finials, roof effects, etc., are worked into a complete and harmonious structural scheme.”[xx] It described the structure as “a most beautiful and commodious building . . . . the only purely Gothic type of building this side of the Hudson [R]iver and the only one in New England.”[xxi]

While Story Chapel and the Administration Building have undergone changes over time, the historical integrity of the structure has been preserved. The current project, for example, includes restoration of the exterior stonework. Gus Fraser, Vice President of Preservation & Facilities, explains that “it was essential to select a replacement stone that would blend with the rich, reddish, earthy hues of the original Potsdam sandstone and complement the building’s characteristic glow in the afternoon light.” The multi-year project that began in 2017 ushers in a new chapter that continues a tradition of thoughtful renovations to preserve and enhance the historic building. Within its walls, staff dedicate themselves to the mission of the Cemetery and visitors continue to find solace and inspiration.

[i] Mount Auburn raised part of the funds designated for the cost of the new building by selling property it owned across from the Cemetery on Mount Auburn Street. Mount Auburn Cemetery Trustees Meeting Minutes, October 18, 1895, Special Meeting, 173.

[ii] Israel Spelman, Annual Report of the Trustees of the Cemetery of Mount Auburn for 1896, published 1897, 3.

[vi] Mount Auburn paid $100 to the architectural firms that submitted plans for the Chapel.

[viii] The Potsdam quarries, in use in the nineteenth and early twentieth centuries, supplied stone for buildings in New York State, New England, and Canada.

[xi] Willard Sears, Annual Report of the Trustees of the Cemetery of Mount Auburn for 1896, published 1897, 4.

[xvii] The Cemetery removed the original porte-cochere at the Chapel entrance in 1971 as the stone was in poor condition and the entrance did not easily accommodate modern hearses and automobiles.

[xix] The 1934 Annual Report noted, “It has been decided to give up the Boston office and consolidate the executive offices at Cambridge. . . . Not only will the consolidation result in a substantial saving in operating costs but it will eliminate duplications of work and promote greater efficiency of administration.” Annual Report of the Trustees of the Cemetery of Mount Auburn for 1834, published 1935, 4.