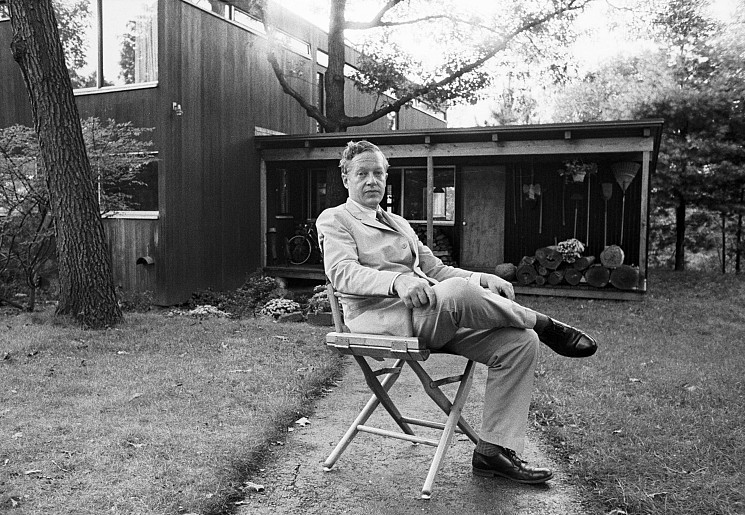 Thompson attended Yale and received his degree in architecture; following graduation, he joined the Navy and served as an officer for five years during WWII. Following his military service, Thompson formed The Architecture Collaborative (TAC) in 1946 in Cambridge with former classmates from Yale. He designed a home and neighborhood complex with TAC in Lexington, MA, known as Six Moon Hill, where he raised his family.

An active champion of the concept of ‘joy’ in the design of buildings, Thompson was also interested in the design within a building. He believed that the furniture, fashion, and textiles inside created a dialogue with the structures themselves (pre-dating the concept of ‘lifestyle design,’ a notion that did not enter the public consciousness until the early 2000s). To reinforce this conviction, Thompson opened a retail store in Harvard Square called Design Research, known as D|R. It was through this channel that Thompson brought Marimekko textiles to American consumers.

The structure was a landmark retail design, comprised of floor-to-ceiling glass windows. Instead of concealing shopping activity, Thompson wanted to create a magnetic environment that drew passersby inside. The building acted as an extension of the pedestrian thoroughfare outside, merging indoors and out, melding the movement of people and weather, and playing with the interactions of light and darkness.

Thompson was known for his bright Marimekko shirts and strength of character. He left TAC in 1966 as the organization began designing for military projects; he did not want to design spaces that would be used for planning destruction. He formed Ben Thompson Associates (BTA) and entered a prolific and award-winning time in his career, designing (and re-designing) such notable structures and pedestrian spaces as Harvard’s Boylston Hall, Quincy Market, South Street Seaport (in New York City), and the Ordway Center for the Performing Arts (Saint Paul, Minnesota).

Thompson also owned six restaurants with his wife, Jane. Harvest Restaurant, in Harvard Square, was a site for culinary education and creativity, inspiring young chefs, like Sara Moulton, who would go on to helm some of the best restaurants in Boston and Cambridge. Besides promoting experimentation in their cuisine, the Thompsons urged their chefs to use local, seasonal ingredients, which led to bi-weekly menu changes. The Thompson’s ethics concerning food foreshadowed the slow food movement, which didn’t come into public consciousness for another forty years.

Thompson retired from professional practice in 1993, and died in his Cambridge home in 2002.

For more about Benjamin Thompson, see A Powerful Imagination: Benjamin C. Thompson (1918 – 2002), Designer and Architect, in the Spring 2010 issue of Sweet Auburn.