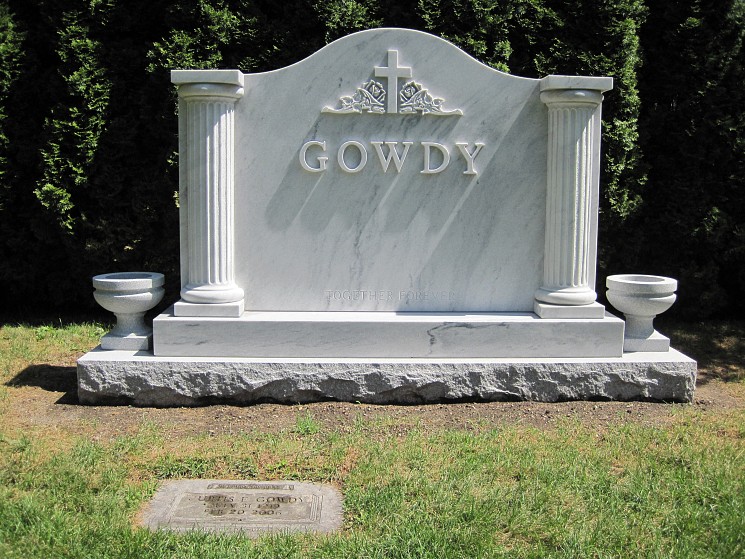 Curtis Edward “Curt” Gowdy was born in Green River, Wyoming.  In high school he played basketball and when he enrolled at the University of Wyoming in Laramie, he played varsity tennis and was a starter on the basketball team.  He graduated in 1942, with the hope of becoming a fighter pilot.  However, a spinal injury forced him out of the Air Force and left him looking for a new career path.  While recuperating from his injury, he discovered his talent for announcing sporting events.  This discovery began what would become a lifelong career in sports.  He began in Cheyenne working at the KFBC radio station and as a sportswriter at the Wyoming Eagle.  In 1946, he left for Oklahoma to be a radio broadcaster for college and minor league football and basketball games.

Unlike most sports broadcasters, Gowdy didn’t develop signature lines or phrases, but it was in Oklahoma that he became known for his easygoing and simple, but factual play-by-play style of broadcasting.  This unique style caught the attention of larger national organizations and in 1949 Gowdy earned a spot working for the New York Yankees.  Here he spent two years working with and being mentored by Mel Allen, the primary announcer for the Yankees. Then, in 1951, Curt became the lead announcer for the Boston Red Sox.  For the next 15 years, he was ‘the voice’ of the Red Sox, calling their games on one radio and 3 television stations.  During this time he also announced the American Football League’s first five seasons from 1960-1965 on ABC.  When the 1956 Red Sox season ended, Gowdy moved on to NBC sports where for 10 years he announced the regular season national telecasts for the baseball shows Game of the Week and Monday Night Baseball, the postseason playoffs and World Series.  He was also the lead announcer for the network’s AFL telecasts and numerous other sporting events and hosted ABC’s The American Sportsman.

Due to his ability to cover a wide range of sports, Gowdy became known as ‘the voice’ of American sports.  By the end of his career, he had been the lead broadcaster of virtually every major sporting event, from the World Series and the Super Bowl to the NCAA Final Four and the Rose Bowl.  All together he called 9 Super Bowls, 14 Rose Bowls, 24 NCAA Final Fours, 13 World Series, 16 Major League Baseball All-Star games and 8 Olympics.   He also co-authored two books: Cowboy at the Mike with Al Hirshberg in 1966, and Seasons to Remember: The Way It Was in American Sports, 1945-1960 with John Powers in 1993.  Even though he retired in 1985, he occasionally returned to the world of sports to announce for the New England Patriots, the Summer Olympics in Seoul, NFL games and even a Yankees-Red Sox game.

Over his long and distinguished career, Gowdy received numerous awards and honors, including: the George Foster Peabody Award in 1970 (the first sports broadcaster to do so), a lifetime achievement Emmy in 1992 and 22 separate Hall of Fame inductions and awards, including inductions into both the Red Sox and AFL Halls of Fame in 1995 and the Rose Bowl Hall of Fame in 2005.  Wyoming, ever proud of their native son, named a new state park for him on “Curt Gowdy Day” in 1972.  In honor of his place of birth, the United States Postal Service officially designated their building in Green River, Wyoming as the “Curt Gowdy Post Office Building” in 2006 when legislation permitting the change was passed in the House of Representatives.

Curt Gowdy is buried at Mount Auburn in Lot 9568 on Spelman Road.