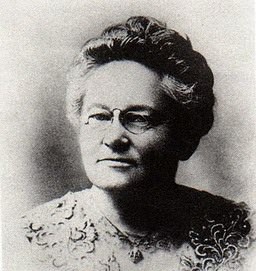 Born in Boston in 1857, Fannie Farmer was a cooking instructor and cookbook author who came to be known as the “Mother of Level Measurements.”

Farmer’s father owned a successful printing business and encouraged his daughter to read. Though she originally planned to go to college, Farmer suffered a paralysis of her left leg at 16 and spent the next several years of her life confined to her home. Around the age of 28, Farmer’s father’s business began to decline, so she began to seek work to support herself. Restaurant work proved too taxing on her physical demeanor, so she began assisting Mrs. Charles Shaw with the household cooking. It was Mrs. Shaw who encouraged Farmer to  attend the Boston Cooking School.

After graduating from the Boston Cooking School in 1889, Farmer returned as an instructor the following year, and became its director in 1891. She published the Boston Cooking-School Cook Book in 1896, a thorough recipe compendium that relied on scientific data, proper nutrition, and precise measurements. The book was wildly successful, and has been translated into several languages and reprinted in new editions numerous times.

In 1902, Farmer opened Miss Farmer’s School of Cookery, where she taught housewives by day and professional chefs by night. Her interest in the link between health and nutrition became apparent with the publication of Food and Cookery for the Sick and Convalescent, which explored nutrition for the ill.

Farmer lectured on cooking and nutrition for the rest of her life, including a series of lectures at Harvard Medical School, and published several additional cookbooks. She suffered from two strokes in her later years, but continued lecturing from her wheelchair. Her final lecture was given ten days before her death.

Fannie Farmer is buried at Mount Auburn in Lot 206 on Central Avenue.

Adapted from the research of Judy Jackson and Cathy Breitkreutz, as published in Mount Auburn Cemetery’s Person of the Week: Fannie Merritt Farmer, 1999.