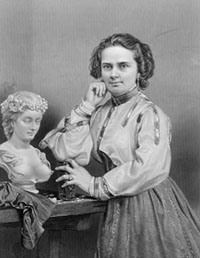 Hosmer was the second of four children of Hiram Hosmer, a physician, a Sarah Grant Hosmer, from whom she inherited her artistic nature. Her two youngest siblings died of tuberculosis in infancy, and their mother fell victim to the same disease when Hosmer was five years old. Her father believed that rigorous physical activity would strengthen the constitutions of his two remaining daughters, but six years later, Hosmer’s remaining sister died of tuberculosis.

Hosmer continued to pursue vigorous outdoor activities such as swimming, hunting, and horseback riding. Neighbors misunderstood her high energy and sense of independence, calling her spoiled and unladylike, and schoolteachers found her difficult to manage. At 16 Hosmer was sent to a boarding school in Lenox, Massachusetts. Lenox was a strong cultural center that attracted actress Fanny Kemble as a resident and author Ralph Waldo Emerson as a visitor. This refreshing environment inspired Hosmer’s artistic nature and led her to study drawing and modeling.

She returned to Watertown in 1851, cultivating her sculpting abilities in her home studio and developing friendships with author Lydia Maria Child and actress Charlotte Cushman. Hosmer realized her dream of studying sculpture in Italy when Cushman invited her along as a travel companion. She spent the next several years studying under English sculptor John Gibson, and belonged to a circle of women artists including Anne Whitney. Hosmer enjoyed success in Italy with her portrait busts, including the ideal subjects of Daphne, Medusa, Oenone, and Puck. The latter (shown left) was extremely popular, even attracting the attention of the Prince of Wales, later King Edward VII, who bough a copy of Puck on a trip to Rome in 1859.

Zenobia in Chains, Hosmer’s most famous work, was shown at the London International Exhibition of 1862 before touring America. She sculpted Queen Isabella of Castile for the 1893 World’s Columbian Exhibition in Chicago, commissioned by the Daughters of Isabella, a Chicago suffragist group.  Known for her lasting friendships, passion for life, and intellectual abilities, Hosmer experienced great success in a field dominated by men and left a strong art historical legacy.

Harriet Hosmer was buried at Mount Auburn in Lot 3747 on Hemlock Path.

Adapted from the research of Judy Jackson and Cathy Breitkreutz, as published in Mount Auburn’s Person of the Week: Harriet Hosmer, 1999.