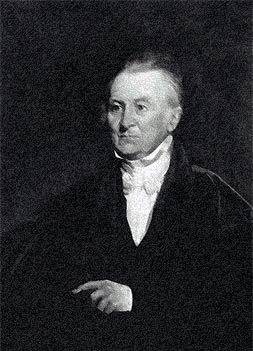 Best known as one of the wealthiest men in Boston and its third mayor, Harrison Gray Otis was born on October 8, 1765.

Born in Boston, Massachusetts, “Harry” Otis was the eldest child of Samuel Allyne and Elizabeth Gray Otis.  His Harrison, Gray, and Otis ancestors for whom he was named had been settlers in New England for at least three generations.  He was the nephew of well-known patriot leader and lawyer James Otis and of the outspoken patriot author Mercy Otis Warren. He grew up in revolutionary times and told of watching the British march out of Boston to Lexington and Concord on the fateful days of April 18-19, 1775.  His mother’s family, the Harrison Grays, chose the Loyalist side and left Massachusetts for England in 1776. Heartbroken, his mother died in 1779, the year that young Harry entered Harvard College.  He graduated first in his class of 1783.

A plan to send Otis to London for a legal education ended when his father’s business failed. Respected family friend Judge John Lowell offered Otis an education in his law office.  Otis responded with studious dedication and in 1786 was admitted to the Massachusetts bar.  He gained a reputation as a fine orator, known for his fluency and wit.  On May 31, 1790 he married Sally Foster, the daughter of a respected Boston merchant.  They shared 46 years together and their family included eleven children.  The couple was known for their affection for each other, their generous hospitality, and enthusiasm for entertaining.

Otis excelled at law and acquired a large income from his legal work and shrewd real estate investments in Boston, Maine, and Mississippi.  In 1796 Otis added a political career to his activities when he was elected as representative to the General Court of Massachusetts as the Federalists swept the Boston elections.  In November 1796 he was elected to the United States Congress.  In Congress from 1797 to 1801 Otis upheld Federalist ideas at a time when strong feelings separated Federalists who were most comfortable with a government by the “wise and good and rich” and the Republicans who championed a more popularly-based government.  Otis supported the administration of President Adams.  He was influential in establishing a system of armed neutrality in 1797-98 to meet French aggression which, like most of the Federalists, he considered a “Jacobin” offensive to undermine the federal government and destroy the fabric of American society.  For that reason Otis supported the unpopular Alien and Sedition Acts.  In 1800 Otis decided not to run for reelection for national office and turned his attentions to his activities in Boston.

In 1795 Otis had engineered an outstanding capital venture.  Otis realized that the building of the new Massachusetts State House on Beacon Hill would make nearby pasture lands ideal for residential development.  Otis joined with Jonathan Mason and a few other investors to form the Mount Vernon Proprietors who purchased 18.5 acres of pasture land on Beacon Hill for less than $1,000 an acre from an agent of the artist John Singleton Copley who owned the land.  Copley had spent the 20 years since the Revolution in England and neither he nor his local agent realized the potential value of his land.  Over the years the Mount Vernon Proprietors sold and developed the “Copley pasture” property earning fortunes in the process.  Otis himself employed Charles Bulfinch to design three of the most distinguished homes in Boston for the growing Otis family.  The first (now 141 Cambridge Street) was built in 1795-96.  Otis sold it in 1800 when he moved his family to a larger Bulfinch-designed home at 85 Mount Vernon Street.  The third Otis mansion, built in 1806 at 45 Beacon Street, became the Otis family home for the rest of his life.

Otis served in the Massachusetts House of Representatives and Senate from 1803-1817 (in the House 1803-05 and 1813-14 and in the state Senate 1805-13 and 1814-17).  In 1814 Otis was chairman of the joint committee of the General Court that favored the Hartford Convention. At the Convention (December 15, 1814 through January 5, 1815) Otis served on the important committees and probably drafted the final report.  Samuel Eliot Morison in his biography described the Convention as the “central event” in the life of Otis.  It was characterized by some as disloyal and treasonable.  For the rest of his life Otis defended his participation in the Convention and explained it as an attempt to force the national government to recognize the sectional interests of New England by ending the war with England and ending the embargo that paralyzed New England shipping. The Ghent treaty ended the war just after the conclusion of the Convention and rendered the resolutions and warnings of the Convention superfluous.

Otis supported the administration of President Monroe and helped to bring in an “era of good feelings” by entertaining the President in Boston in 1817.  That year, after declining a Federalist nomination for governor of Massachusetts, he was elected to the United States Senate.  He dedicated himself to the effort to form a northern bloc against the extension of slavery to Missouri in 1820.  In 1822 he resigned his senate seat to run for mayor of Boston. Though defeated in that election, he was elected mayor of Boston three times in 1829, 1830 and 1831.  Although he publicly denounced the abolitionist movement, he became known for his defense of the right of free speech for Boston-based anti-slavery leader William Lloyd Garrison, publisher and editor of The Liberator.  Upon his death Otis was purported to be worth $800,000, which if measuring the economic power of the dollar in 2011, would equate to roughly $5.9 billion dollars.

Harrison Gray Otis is buried at Mount Auburn in Lot 628 on Cypress Avenue.