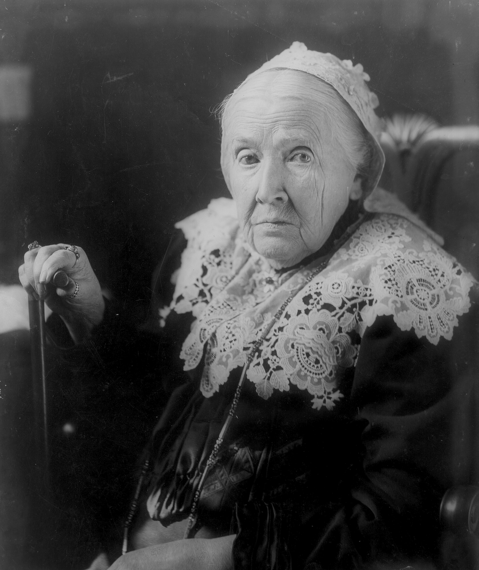 Julia Ward Howe, author of “The Battle Hymn of the Republic” and noted Woman’s Club and suffrage leader, was born in New York City on May 27, 1819.

Howe and Samuel Gridley Howe, the director of the Perkins Institute for the Blind, married in April of 1843 and had six children, four of whom survived their parents. Howe’s marriage was an unhappy one, as her husband opposed her desire to participate in public life. As she became more socially withdrawn, she began reading and studying language, religion, and philosophy, and began publishing poetry and plays in 1854. In February of 1862, her poem “The Battle Hymn of the Republic” was published in Atlantic Monthly. Inspired by a visit to the Union troops near Washington, D.C., the poem became a national success and made a celebrity of Howe.

Howe used her fame to promote the Women’s Peace Movement and instituted the annual Mother’s Day for Peace in 1872. This was the beginning of a lifelong dedication to the growing Women’s Suffrage Movement. In 1868 she became the first president of the newly-formed New England Women’s Club. When the suffrage movement split in 1869, she became a leader, along with Lucy Stone, of the American Woman Suffrage Association.

Following her husband’s death in 1876, Howe traveled throughout Europe and the Middle East. When she returned to America she continued campaigning for women’s suffrage. In 1883 she published a biography of Margaret Fuller (Lot 2250, Pyrola Path – cenotaph only) and continued supporting the growth of the Women’s Club Movement, frequently lecturing to women’s groups. She became the first president of the United Friends of Armenia in 1894, and was hailed by thousands at an Armenian rally in 1904. In 1908 she became the first woman elected to the American Academy of Arts and Letters. In 1910, at her memorial service at Symphony Hall, over 4,000 visitors sang “The Battle Hymn of the Republic.” Julia Ward Howe is buried at Mount Auburn in Lot 4987 on Spruce Avenue.

Adapted from the research of Judy Jackson, as published in Mount Auburn’s Person of the Week: Julia Ward Howe, 1998.