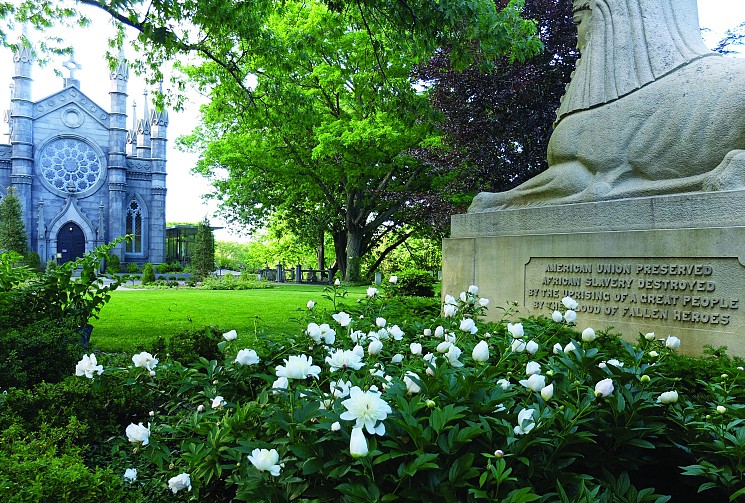 One of the enduring contributions of Jacob Bigelow, founder and second president of Mount Auburn Cemetery, was the colossal figure of the Sphinx.[1]  “Bigelow determined . . . with his personal sense of mission to embellish Mount Auburn with commemorative structures compatible with the goals that inspired the cemetery’s founding,” writes Blanche Linden in Silent City on a Hill: Picturesque Landscapes of Memory and Boston’s Mount Auburn Cemetery.[2]

The statue, carved in the form of the Sphinx of Antiquity, would serve, Bigelow explained, as a memorial to commemorate the Union soldiers, who lost their lives in the Civil War. Bigelow commissioned sculptor Martin Milmore to create the sculpture after Bigelow’s design. Milmore was also known for his Roman-Doric column dedicated to Civil War sailors and soldiers in Boston Common.

In December 1871, a single block of granite from Hallowell, Maine, was reduced to approximately 40 tons and conveyed by railroad to Boston. The owner of the quarry admitted to never having moved a stone this heavy.[3]  Milmore created a plaster model for the Sphinx in his studio on Tremont Street in Boston. He then transported the model by horse and carriage to the marble yard of the McDonald Monument Company across from the Cemetery on Mount Auburn Street. There, he and his brother Joseph carved the great statue. They completed the Sphinx in July 1872, and in August it was moved into the Cemetery.

Bigelow, one of the early designers of the Cemetery, incorporated numerous Egyptian motifs into the architecture at Mount Auburn, including Bigelow Chapel and the Egyptian Revival Gatehouse. For his Civil War memorial he chose the Sphinx because of its “associations of repose, strength, beauty, and duration,” and because it was “the ideal personification of intellect and physical force,” considered by Bigelow to be the perfect emblem of a newly united America.[4]  An Egyptian lotus, a symbol of human life, graces the base of the pedestal on the memorial’s south side.

Bigelow’s design infused other characteristics symbolizing the new nation, including an American water lily on the north side of the base and an American eagle headdress on the Sphinx’s forehead, rather than the traditional Egyptian asp. “The same ideal from which . . . has looked backward on unmeasured antiquity, now looks forward to illuminate progress,” Bigelow wrote. “It stands as a landmark of . . . a great, warlike, and successful nation . . . calling back its military veterans from bloodshed and victory to resume the still familiar arts of peace and good-will to men.”[5]

As he grew older Bigelow suffered from cataracts and experienced increasing loss of vision. When he visited the completed statue, his friends remembered him fondly touching the contours of the massive form.[6]  With a face that measured 3 feet across, the length 15 feet, and the height of 8 feet, the Sphinx, which initially raised concern that it might even frighten horses, created an awe-inspiring sight atop the hill across from Bigelow Chapel.[7]   For the past century and a half, visitors have stood before the great memorial and read the inscriptions that appear in Latin and English: