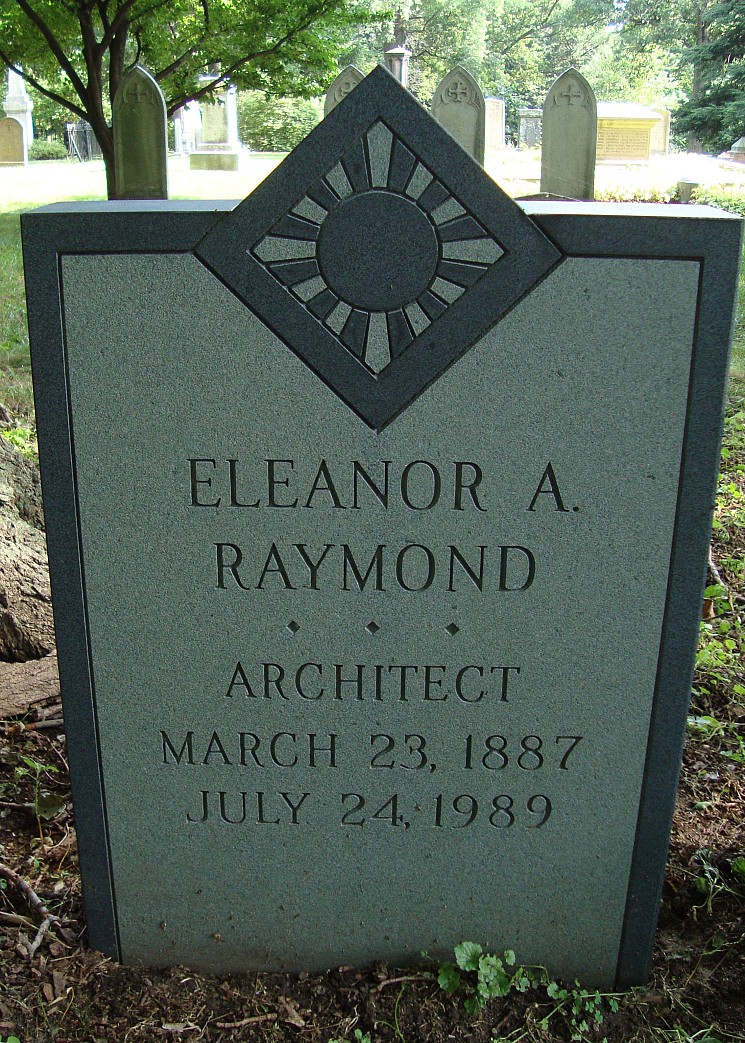 Architect Eleanor Raymond was born in Cambridge, Massachusetts, and was one of seven children of Thomas Cole Raymond, a railroad purchasing agent from Boston, and Josephine McAndrew Watt from Illinois.  The couple married in 1874 and soon moved to Cambridge, where they built at 18 Ellery Street the house where Eleanor was born.  In 1905 Eleanor left her home in Cambridge to enter Wellesley College, where she concentrated her studies in botany and also took classes in art and the history of architecture.Following graduation in 1909, Eleanor spent several years working at settlement houses in Boston with her college roommate, Jean Adelaide Cross.  As socially-conscious volunteers, they helped create neighborhood gardens in the poorer districts of the city.  In 1913 the pair departed for a lengthy sojourn in Europe, accompanied by Jean’s mother, returning home after a year when World War I began.  Raymond and Cross together also became active in the suffragist movement in the years leading up to 1919, when the right for women to vote was granted by the Nineteenth Amendment to the Constitution.

In 1915 Raymond attended a lecture series given by landscape architect Fletcher Steele.  Inspired by his ideas, she begged him to let her work – for free – at his office.  He accepted her as an office assistant, and for the next eight months she learned how a professional design office was run.  Steele also introduced her to the newly-founded Cambridge School of Architecture and Landscape Architecture for Women, started in 1915 by struggling young architect Henry Atherton Frost (Lot 6827 Fountain Avenue).  Frost had been asked by Harvard University to tutor a young woman who was denied admittance to Harvard’s all-male architecture course, and by 1916 Frost had accepted six students including Raymond as apprentices in his office.  He was surprised to discover that despite his initial expectations, the women were as dedicated and competent as the regular Harvard students.  Though the curriculum at the Cambridge School was not equivalent to Harvard’s – it focused on the appropriately feminine sphere of domestic architecture – the training was rigorous and featured guest lectures by noted professors.

While still a student at the Cambridge School Raymond was hired to work in Frost’s office, and following her completion of the program in the fall of 1919 she was made a full partner in the firm.  Their practice focused primarily on residential architecture, thriving with the 1920s housing boom in America.  Frost and Raymond’s designs for Colonial Revival houses were not only commissioned by local clients, but were also featured in House Beautiful magazine and could be mail-ordered nationwide.  Ethel Power, editor of House Beautiful, had been a classmate of Raymond’s in Cambridge and became a lifelong friend and companion.

Following the death of Raymond’s father in 1922, Eleanor and her sister Rachel purchased a house at 112 Charles Street in Boston and lived there with their widowed mother Josephine, former classmates Ethel Power and Mary Cunningham, and Mary’s sister Florence.  These women supported each other professionally and personally and maintained close ties with other female design professionals throughout their lives.  They often collaborated on projects, Rachel being an interior designer, Eleanor an architect, Mary a landscape architect, and Ethel a promoter of their work through the pages of House Beautiful.

By 1930, Raymond had made two more trips to Europe and was intrigued by the new European style of architecture.  Among her stops in Germany was a visit with Ise Gropius, wife of modernist architect Walter Gropius, and a tour of the ultra-modern design school the Bauhaus, from which Gropius had recently resigned as director.  In 1931, when Rachel asked Eleanor to design a house for her in the Boston suburb of Belmont, Raymond had an ideal opportunity to experiment with the new modern aesthetic.  With her sister’s enthusiastic support, Eleanor designed “what is probably the first modern house in Massachusetts,” according to the November 1933 issue of Architectural Forum.  To connect the modern house with its surroundings, Raymond used local materials and colors, an approach used by Walter Gropius when he built his home in nearby Lincoln seven years later (1938) after moving to the United States. Though she designed only one other house that was as stylistically modern as the Rachel Raymond House (the 1932 Dover Studio for sculptor Amelia Peabody), Raymond continued to be “a dazzlingly prolific innovator,” integrating modern functionalism and new technologies with traditional forms and details.  Such projects as the Plywood House (1940), Masonite House (1944), and an aluminum barn (1952) made prolific use of modern materials, while the Sun House (1949) incorporated solar heating panels developed by Dr. Maria Telkes of the M.I.T. solar laboratory.  Raymond did not use technology for its own sake, however, and was committed to quality domestic design that met the needs of those who would use it.  She was often inspired by early American architecture, and was quoted as saying that “anything I see that I like and I think is worth looking at hard influences my work.”

Raymond opened her own office in Boston in 1935 and continued to practice into the 1970s.  She received a Master of Architecture degree from Smith College in 1936, was appointed a trustee of Smith in 1939, and was elected a Fellow of the American Institute of Architects in 1961 (the only woman honored that year).  Raymond’s partner Ethel Power died in 1969 in an accident, but Raymond lived to be 102 years old.  Her slate monument on Greenbrier Path is appropriately both traditional and modern in appearance, reminiscent of colonial slate markers but contemporary in style.  The lines atop the monument mimic the roof of a house in honor of her residential architectural work and the sunburst represents the Sun House project.

Adapted from the research of Cathy Breitkreutz as published in Mount Auburn Cemetery’s Person of the Week.