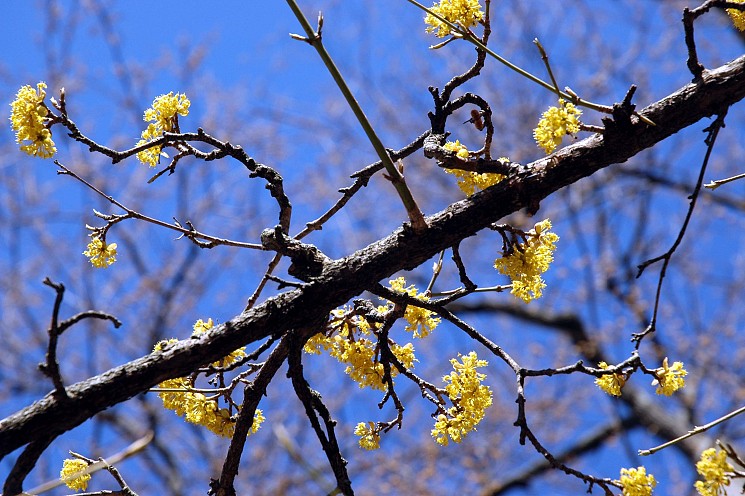 After enduring a full month of March that was more often like a lion than a lamb, let us welcome the flowers of April. Sprightly, lightening our landscape in early April are the golden haze of flowers of the Corneliancherry dogwood, Cornus mas. Plants’ common names versus their Latin names may occasionally produce mini-conundrums, red cedar (Juniperus virginiana) is not a cedar (Cedrus), mountainash (Sorbus) is not an ash (Fraxinus), blue beech (Carpinus) is not a beech (Fagus), tulip poplar (Liriodendron) is not a poplar (Populus), etc.

Corneliancherry dogwood is not a cherry (Prunus), not even in the same botanical family as cherries, Rosaceae, the rose family. Rather this is a less well-known species of dogwood, in the genus Cornus. This genus with at least 30 species is more often known for two of its showy ornamentals, our native flowering dogwood and the summer blooming kousa dogwood.

In early spring, even before forsythia, these small trees or large shrubs are a reliable indication that our region’s winter days are indeed numbered. On leafless branches, tiny, ¼-inch in diameter, individual yellow flowers, occurring clustered in short stalked umbels, create a striking effect in the otherwise still stark winter landscape. Native to central and southern Europe and western Asia these have been planted since ancient times. Pliny the elder (AD 23-79), naturalist, philosopher and author of Naturalis Historia, an early encyclopedia, wrote of these flowers blooming in Italy with the, “…first breadth of the west wind…”.

When successfully pollinated, these flowers will produce in late summer, fleshy 5/8-inch, oblong drupes. These lustrous, red fruits, partially hidden by the leaves, were thought to resemble carnelian, a red form of semitransparent quartz, hence the common name’s origin. Exceedingly early knowledge of these plants’ fruits was recounted by Lee Reich in his Uncommon Fruits Worthy of Attention, “…a fruit that has been enjoyed by humankind for the past seven thousand years! At a site in northern Greece, early Neolithic peoples left traces of their meals of cornelian cherry, along with remains of einkorn, wheat, barley, lentils and peas.”

This tart/sweet fruit continued to be appreciated in Europe over the millennia. Throughout the Middle Ages it was historically cultivated in monastery gardens. Introduced into Britain in the sixteenth-century, we have written accounts from notable early authors. The great herbalist, John Gerard (1545-1612) included it in the illustrated Herball, or Generall Historie of Plants, “…The floures come forth in the Spring in the moneth of Aprill: the berries are ripe in Autumne….it growes not wild in England. But yet there be sundry trees of them growing in the gardens of such as love rare and dainty plants, whereof I have a tree or two in my garden.”  John Parkinson (1567-1650), apothecary to James I (1566-1625), included it in his monumental Paradisi in Sole Paradisus Terrestris, in the orchard section, “…the flowers are many small yellow tufts, as it were of short haires or threads set together, which come forth before any leafe, … the fruit are long and round berries, of the bigness of small olives, with an hard round stone within them, like unto an olive stone…By reason of the pleasantnesse in them when they are ripe, they are much desired…”

Joan Parry Dutton in Plants of Colonial Williamsburg informs that “…cornelian cherry was introduced into Dutch New Amsterdam from Holland in 1642 by Adrian Van der Donke – Yonkers was named for him…” Spreading into wider U.S. cultivation from its New York beginnings Peter J Hatch in The Fruits and Fruit Trees of Monticello documents “…Jefferson planted four seeds…in 1774…” Originally in this country much desired for its fruits, over time the fruit went out of use and Corneliancherry dogwood became more appreciated as an ornamental plant, transferred from the orchard to the general landscape.