…But I am adrift

Without my tree of life Previously we discussed Giant Arborvitae, so herein we follow-up with Eastern Arborvitae, Thuja occidentalis, also referred to by some as Eastern Whitecedar. The common names of many plants have varied etymologies: geographic; Alaska yellow-cedar, European beech, Japanese cedar, Russian sage, named for someone; Franklin tree, Douglas fir, literally descriptive; redbud, Juneberry, yellowwood, even curiously evocative; butterfly bush, cardinal flower, goldenrod, dove tree, tulip tree, fringetree. Learning that arborvitae is Latin for “tree of life” could, or perhaps should, cause one to pause to contemplate why or how any tree is accorded such a noble appellation.

…In the midst of the

Forest of your Soul

You will find this The name arborvitae is credited to Jacques Cartier (1491-1557), the great French explorer. Cartier was the first to claim Canada in the name of the King of France in 1534, on his first of three expeditions to Eastern Canada. The following year a second voyage with three ships and 110 men would later be succeeded in 1541 with his third expedition with five ships. Cartier was one of the first to formally recognize that the New World was a separate land mass from Europe /Asia, and was the first to map many parts of Newfoundland, the Atlantic provinces and the St. Lawrence River. It was during his second voyage in 1535-1536 that we acquire the name arborvitae. While over-wintering near current day Quebec, the expedition’s ships were frozen in ice. The 110 men enduring Canadian cold winter eventually also were experiencing painful limbs, rotting gums, loose teeth, the symptoms of scurvy. An Iroquoian guide, who had been accompanying them also had the symptoms and was let off the ship. Here we excerpt from Sheila Connor’s New England Natives, “Cartier recorded the turning point in their suffering in his account of the voyage: ”They brought back from the forest nine or ten branches and showed us how to grind the bark and boil it in water, then drink up the potion every other day and apply the residue as poultice to swollen and infected legs.” The treatment was successful, and Connor continues, “Cartier brought back to his king, Francis l [1494-1547], a gift from the Boreal Forest, the first North Temperate tree introduced to Europe. The Indians called the plant annedda; the French, l’ arbe de vie, ‘the tree of life.’…in English by the New Latin version of its name, arborvitae.” How little I know of that arbor vitae when I have heard only what science can tell me. It is but a word, it is not a tree of life. But there are twenty words for the tree and its different parts which the Indian gave, which are not in our botanies, which imply a more practical and vital science. He used it every day. He was well acquainted with its wood, its bark and its leaves.  -Henry David Thoreau

Thuja occidentalis, Eastern Arborvitae or Eastern Whitecedar is native from Nova Scotia to Manitoba and south through Minnesota, Wisconsin, Illinois to Massachusetts; south on the limestone Alleghenies of the Virginias, mountains of Tennessee, and rare in western North Carolina. It generally is not a large tree, 40 to 60-feet high at the maximum, but more often 20-30-feet in landscape usage. The evergreen, opposite or two-ranked leaves, are scale-like, ½-inch long, blunt and arranged as to make small branchlets flat in shape. The dull yellow-green colored leaves have a pleasant, aromatic odor, often described as tansy-like. This aroma comes from tiny glands (noticeable bumps), on the leaf scales. As with many other conifers, separate inconspicuous male and female flowers are on the same plant. When pollen from male flowers fertilize female flowers, ½-inch long, oblong, cones may be produced carrying small winged seeds, which are favored by redpolls, pine siskins, many songbirds, as well as squirrels. Ornithologically, some of the naturally wet areas where these tend to grow provide fine birding opportunities. In Trees of New England, Charles Fergus writes, “In spring, cedar swamps ring with the calls of hermit thrushes, yellow-bellied flycatchers, winter wrens, and northern waterthrushes. Other birds breeding in northern white-cedar stands include Canada warbler, yellow-rumped warbler, white throated sparrow, and northern parula. As cedar swamps often do, ours merges with an active beaver pond, where I see great blue herons and ducks of various species.”

…A wonderful tree of life I wish you

With many fine branches…

After Cartier brought back seedlings of Eastern Arborvitae to the French king, they were planted at Fontainebleau, then a royal chateau. In the 17th-Century notable use as an evergreen hedge or accent, was begun by Andre Le Notre (1613-1700), famous gardener of Louis XIV (1643-1715) at the expanded Fontainebleau as well as in other Royal Gardens. From France, progeny of these original plants, in later decades, made it to the Netherlands, Austria, Germany, England, and eventually, with successive imported additions, all of Europe. From these early landscape uses until today Eastern Arborvitae, and its many cultivated varieties have been workhorses within many successful trans-continental landscape designs.

…The tree of life has been shaken,

And but few of us linger now,

In the top of the uppermost bough… Aside from acquired landscape value, Eastern Arborvitae’s wood had several signature historic uses. As one of the lightest weight northeastern woods, this was a first choice among many Native American tribes for frames and ribs of their famous birch-bark canoes. Colonial settlers quickly realized that the wood’s resistance to decay made it a prime tree of choice for fence posts and rails to contain livestock. But easily by far most of these trees yielded vast quantities of shingles for buildings. Additional uses included railroad ties, utility poles and planking for small boats.

I am but a leaf on the tree of life,

And I shake in the wind that passes by,… In addition to occurring in wet fens and peatlands Eastern Arborvitae often are found in dry, calcium-rich uplands, old fields and areas near limestone ledges. Fergus writes of limestone ledges on the shore of Vermont’s Lake Champlain where one of these trees has been core bored and found to be 350 years old. Exceptional long-life expectancy of these trees was thought to be 250-350 years.  Old trees are not always big as we discussed previously with the bristlecone pines. This brings us to the fascinating research of Eastern Arborvitae by Peter Kelly and Douglas Larson who in 1998 started the Niagara Escarpment Ancient Tree Atlas Project.

The Niagara Escarpment is a Silurian age geological formation running east/west from New York, through Ontario, Michigan Wisconsin and Illinois. On these limestone cliffs it is not unusual to find extensive expanses of sheer vertical cliff faces of one-hundred-feet. Dangerous and inhospitable to human habitation, much of this escarpment has escaped disruptive human impacts. Growing out of cracks in these cliff faces, stretching from Niagara Falls to Green Bay, Wisconsin smallish cliff-hanging Thuja occidentalis are part of a remarkable vertical forest. Using rock climbing and forestry core boring skills there is now proof of what may be the most extensive old-growth forest in eastern North America. Kelley and Larson document their findings in their 2007 book The Last Stand. Therein the penultimate chapter begins, “In the last five years, we have sampled nearly 600 living trees at various locations along the 735 kilometres of the Niagara escarpment, and close to 250 of these trees have turned out to be exceptionally old for their respective cliffs. Ten of these cedars were found to be over 1,000 years old! Two cedars began life as seedlings over 1,300 years ago.”

…And firmer of the rock he took

A tightening clutch with grip of steel,

Nor once the storm-fiend made him reel;

And when his weary foe passed by,

Still towered he proudly to the sky… Not surprisingly, many of these oldest-aged Eastern Whitecedar appear dead, contorted and twisted with age, and exhibiting significant barkless portions of their trunks. Yet they still flourish in their harsh habitat, protected by the very cliffs they have grown on. Their annual growth rates are some of the slowest recorded for woody plants. Researchers have had to use microscopes on occasion to discern between annual growth rings, some having an average outward growth of only 0.05 millimeter per year. Even in death, the decay resistance of this wood has provided notable results. Quoting again from The Last Stand, “If the wood is kept dry and out of contact with soil, or away from the fungi that lead to decay, the wood can endure for thousands of years. We found intact 3,550 years old (radiocarbon-dated) eastern white cedar wood in the rocky talus at the base of one cliff. Submerged cedar wood over 8,500 years in age has been found at a depth of ten metres in the waters of Georgian Bay. Both wood samples showed little evidence of structural change despite thousands of years of exposure to the elements.”

With just under one-hundred cultivated varieties and species of Thuja occidentalis, Eastern Arborvitae, Eastern Whitecedar growing here at Mount Auburn, a future visit may provide another reason to appreciate our timeless and beautiful landscape.

that could outwit winter-

as though the life of everything 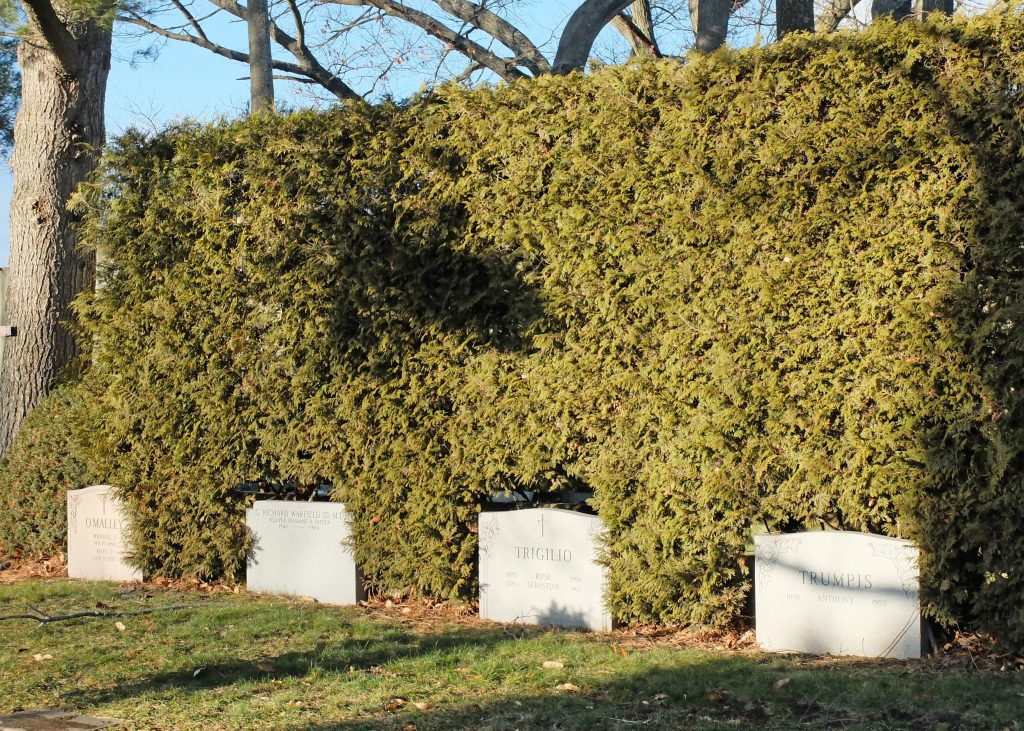 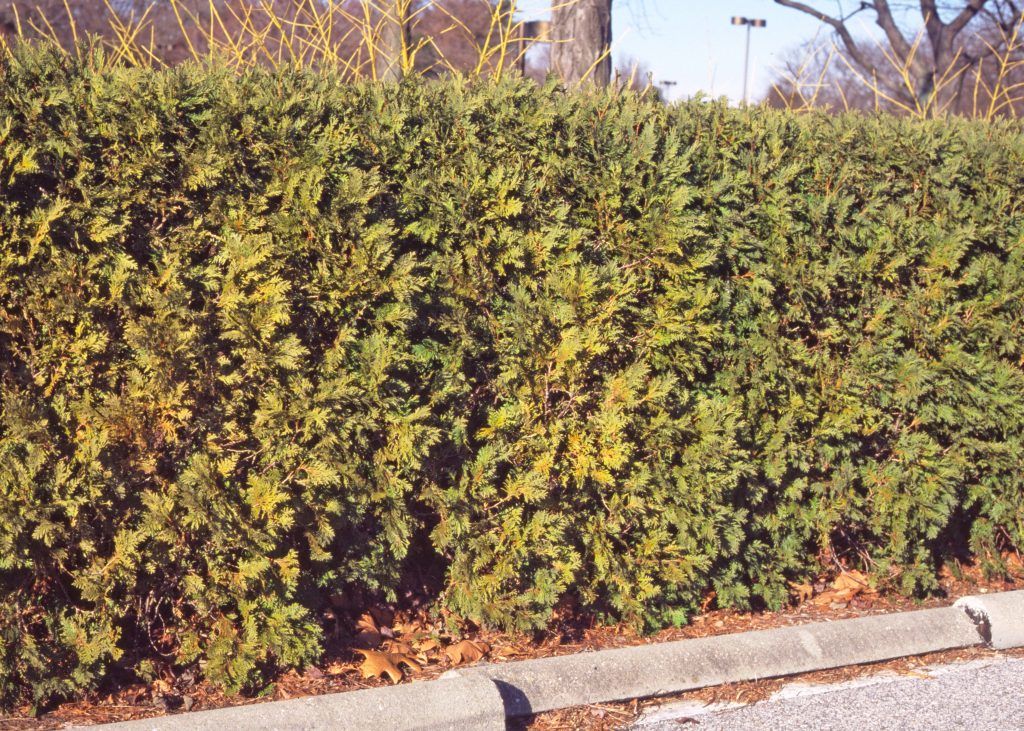 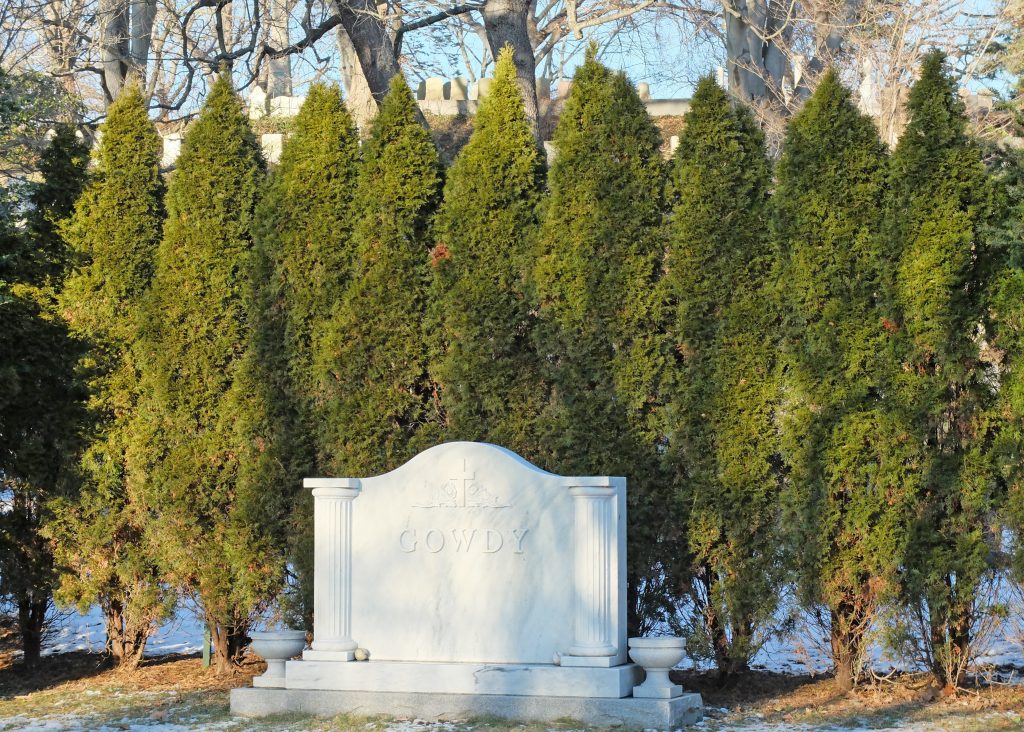