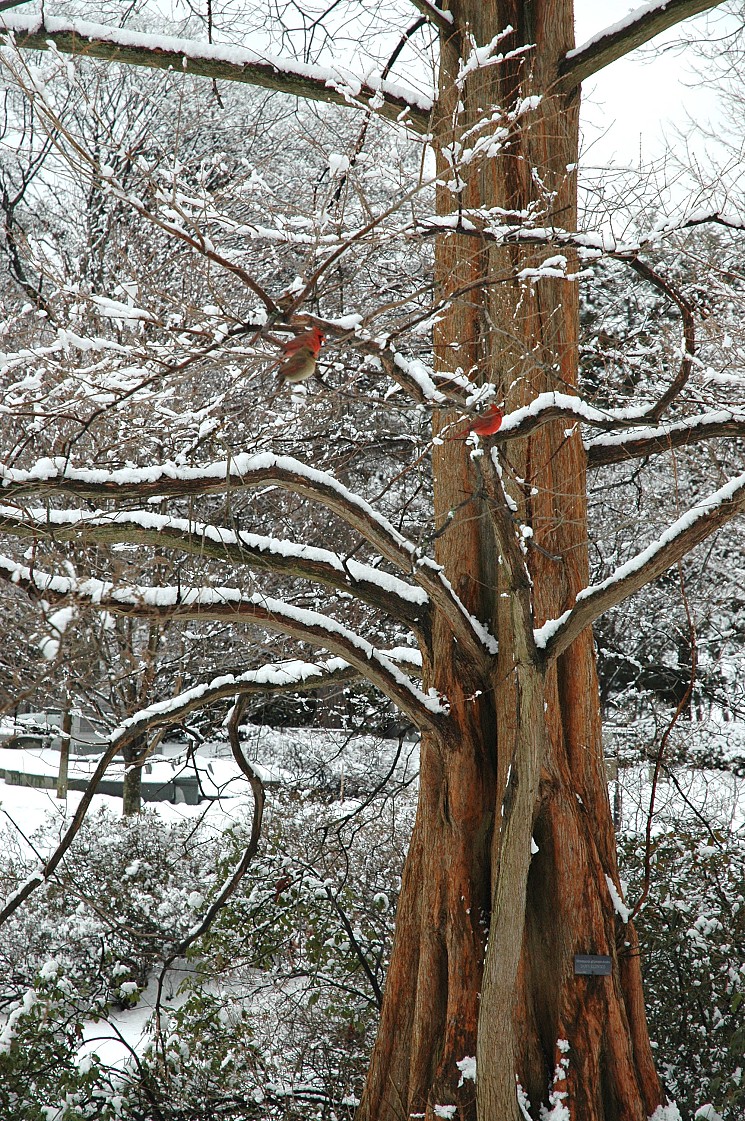 During the Cretaceous period, some 136 million years ago, giant Metasequoia glyptostroboides – more commonly known today as Dawn Redwood trees – thrived over a large portion of the northern hemisphere, but were thought by western botanists to have been extinct until a “living fossil” was re-discovered in Szechuan province in China during the early 1940s.

Widely popular outside China today, the Metasequoia glyptostroboides has been propagated and distributed to many parts of the U.S. and Europe through the generosity of Harvard University’s Arnold Arboreteum in sharing seeds and seedlings obtained during a 1946 expedition.* Number 60 on Mount Auburn’s “Unusual Trees” Map, and #37 on the Cemetery’s “Big Trees” Map, the striking 76 foot-tall Dawn Redwood – pictured above with cardinals on branches with snow – has a fluted trunk with striking reddish-brown bark. One of the few non-evergreen, deciduous conifers in the world, the bright green feathery leaves of the tree turn a vivid orange-copper color before dropping off in the fall.

The first part of the name Metasequoia comes from the Greek term meta meaning “like, among, akin, with, of or after” and sequoia for the reason that it appears to be a relative of the Coastal Redwood and the Giant Sequoia of Northern California. The second part of the name notes the connection to Glyptostrobus, another deciduous conifer from Southeast Asia. Occasionally referred to as a Water Larch, the Metasequoia glyptostroboides is a member of the former Taxodiaceae (Redwood) family, which also includes Taxodium distichum or Baldcypress (number 109 on Mount Auburn’s “Unusual Trees” Map). We now consider the former Taxodiaceae family (with the exception of Sciadopitys) to belong to the family Cupressaceae (Cypress). Both the Dawn Redwood and the Baldcypress can be found growing near the shores of Auburn Lake at the Cemetery.

**This Horticulture Highlight was originally published in the February 2008 issue of the Friends of Mount Auburn electronic newsletter.