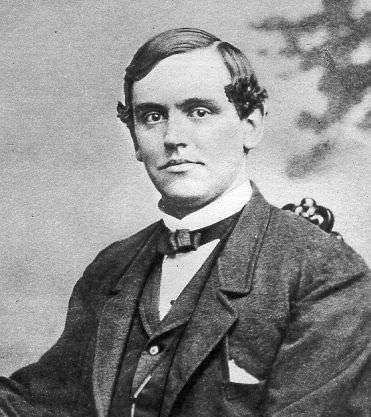 Phillips Brooks, rector of Trinity Church and Episcopal Bishop, was born in Boston, Massachusetts on December 13, 1835.

Brooks was a descendant of Judge Phillips, the founder and benefactor of Phillips Andover Academy and the Andover Theological Seminary, as well as Reverend John Cotton. He was raised as a member of St. Paul’s Episcopal Church on Tremont Street and continued his family legacy by entering the ministry.

After attending Boston Latin School, Brooks entered Harvard in 1851 at the age of 15. He taught at Boston Latin following graduation, but could not control his students and was asked to resign. Brooks spent the next three years in Alexandria, Virginia at the Protestant Episcopal Church studying for the ministry. He was ordained in 1859 at 23 years old and accepted the position of minister at the Church of the Advent in Philadelphia. Brooks was a charismatic speaker and large crowds gathered to hear him speak.

He spent the years of the Civil War in Philadelphia and supported Lincoln as an abolitionist. Following Lincoln’s death, Brooks spoke at Harvard’s commencement address to an audience that included Julia Ward Howe (Lot 4987, Spruce Avenue) and Oliver Wendell Holmes (Lot 2147, Lime Avenue). Brooks spent the next year abroad and traveled to Palestine where he was inspired to write the lyrics of “O Little Town of Bethlehem.” He turned down an offer to become head of the new Episcopal Theological School in Cambridge in 1867, and also turned down an offer from Trinity Church in 1868. In 1869 Brooks decided to accept the position of rector at Trinity Church.

Prior to Brooks’s arrival at Trinity, the congregation was small and met in a cold, gothic church located on Summer Street. The popularity of his sermons helped expand the size of the congregation, and Brooks was able to convince his public that a move to the newly-developed Back Bay was in order. H.H. Richardson’s design for Trinity Church was completed in 1872, the same year that the great Boston fire of 1872 consumed the old Trinity.

Brooks declined the invitation to become Harvard’s pastor and Professor of Christian Morals in 1881, but became a member of the university’s board of pastors.In 1891 he was elected Bishop of the Diocese of Massachusetts, and the consecration service was viewed by thousands. Brooks died in 1893, and his service at Trinity was attended by thousands of congregants and members of the public who followed the funeral procession to Mount Auburn. Phillips Brooks is buried at Mount Auburn in Lot 1288 on Mimosa Path.

Adapted from the research of Judy Jackson and Cathy Breitkreutz, as published in Mount Auburn’s December Birthday: Phillips Brooks, 2000.