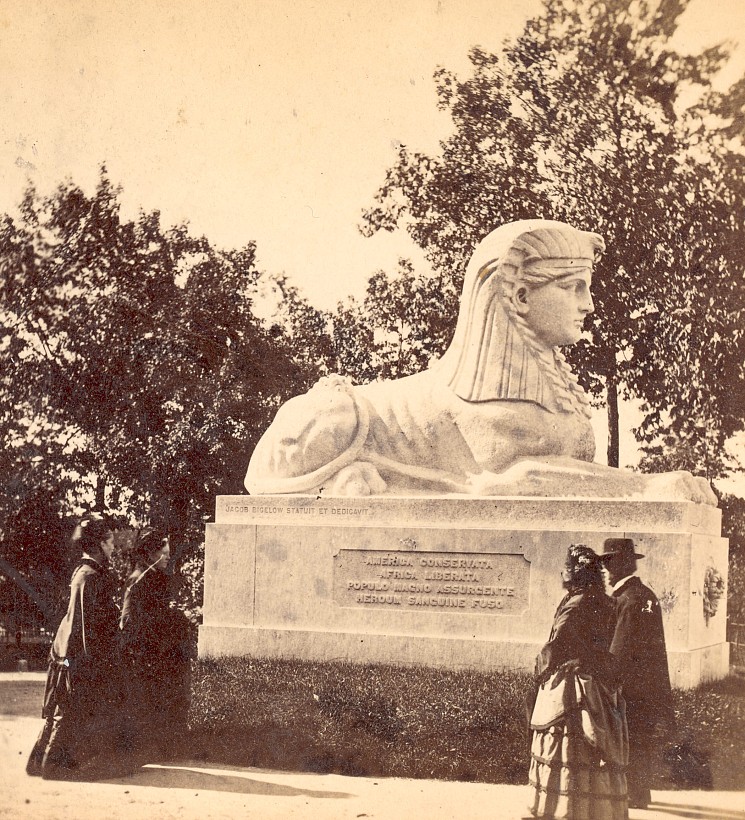 In March 1865, Bigelow first proposed that the Cemetery commission “a public monument in memory of the heroes who have fallen in the present war for the preservation of the Union.”  However, the trustees postponed making any decision.  Bigelow wanted something more ambitious and symbolic than another obelisk.  He finally took matters into his own hands and commissioned the Irish-born sculptor, Martin Milmore, to create a Sphinx to be cut from a single block of Hallowell granite, 15 feet long and about 8 feet high.

The Sphinx was chosen to represent the strength of the lion and the beauty and benignity of woman.  Dr. Bigelow composed the inscriptions in Latin and in English “America Conservata; Africa Liberata, Populo Magno Assurgente; Heroum Sanguine Fuso” or “American Union Preserved; African Slavery Destroyed; By the Uprising of a Great People; By the Blood of Fallen Heroes.”

After the statue was completed in model and contracted for in granite, Bigelow presented it to the Trustees at the February 23, 1871 meeting.  The Trustees agreed to accept the gift and to bear the expense of transporting the work from the Entrance gate to its site in the Cemetery and the cost of a suitable foundation.

Sadly, Dr. Bigelow never actually saw the monument in place. By 1872, cataracts had ruined his eyesight. He was led to the site to feel his monument.