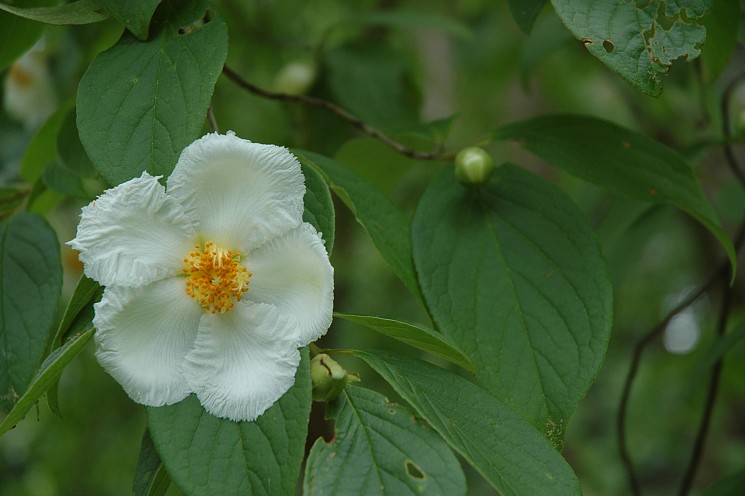 Remember the plants, trees, animal life who all have their tribes, their families, their histories, too. Talk to them, listen to them. They are alive with poems.
-Joy Harjo

One tree worth remembering is the Stewartia pseudocamellia, Japanese stewartia. This is one of the more cold hardy members of the Theaceae, or tea family. But now as we enter the summer heat of July everyone may enjoy its 2-3 inch diameter, glamorous, white, flowers which are accentuated with a central group of contrasting golden, orange stamens. These five-petaled flowers, cup-shaped when opening, then later more saucer-shaped, have minutely fringed edges, and the petals tend to be fused together at their base. This often results in complete flowers falling intact to the ground after their maturity.

There are 8-20 species of Stewartia in the genus, depending on taxonomic interpretation, found throughout eastern Asia and in southeast North America. While most species may have similarly attractive flowers, this is the most popular species found in gardens, contributing ornamental value in three or even four seasons.  The simple, alternate, elliptic, 2-4 inch leaves are generally disease and insect free. Autumn foliage, while variable, is often excellent and rich, and the same tree may exhibit yellow, orange, red, or dark reddish-purple leaves in different years.

The bark is an attraction in itself. The exfoliating bark fragments create artistic irregular patterns of tans, golden browns, dull greens, grays, egg whites, with an occasional touch of orange. This colorful bark is generally smooth, and has been described as rather sinuous, or muscled in appearance. This is nothing short of spectacular in the winter landscape.

On your next visit to Mount Auburn look for the handsome specimens of Stewartia now adding color to our summer landscape, but remember also to return and visit again in the autumn and winter.  An outstanding specimen may be found in Consecration Dell on Iris Path. Other Stewartias are located on Mountain Avenue, Chestnut Avenue, Story Road, Laburnum Path, and at Birch Garden.

*This Horticultural Highlight was originally published in the July 2011 issue of the Friends of Mount Auburn electronic newsletter.