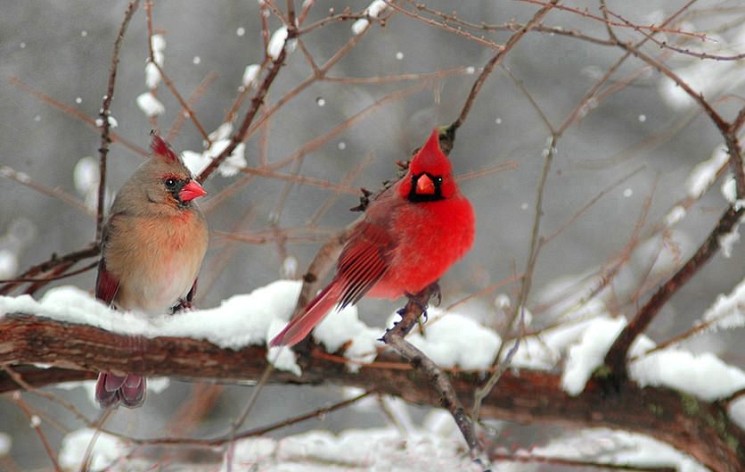 Most everyone is familiar with the Cardinal; the male is unmistakable with his bright red plumage, a crest, and a contrasting black around the base of a bright red bill. The females have warm red tones including a crest and red bill.

It may surprise most folks to know that the Northern Cardinal is actually a fairly recent bird of the northeast. The first attempted nest in Massachusetts was not documented until 1960 in Amherst, that nest failed, and in 1961 the first successful breeding was in Wellesley. Throughout the 1960’s, Cardinals rapidly increased and now they can be found in almost everyone’s back yard!  A far cry from the 1800’s when Cardinals were captured by the thousands to satisfy the caged bird industry. This thankfully ended with the passage of the Migratory Bird Treaty Act of 1918.

The Cardinal is named after the red robes worn by Roman Catholic cardinals and are noted for their loud whistled songs, often sung from the top of a tree. The female Cardinal also sings especially during the breeding season letting the male know to bring food to the nest. Typical habitats are thickets and brushy areas around forest edges and clearings as well as parks and residential areas. At Mount Auburn the Northern Cardinal is a common breeder, often with two broods; I have found many nests over the years most often in yews, rhododendrons, and low in evergreen trees. It is not unusual to see “double-digit” Cardinals in the winter months especially at the feeder at Auburn Lake. There is almost nothing as beautiful as seeing several Cardinals in in newly fallen snow.

The Cardinal is a year-round resident of Massachusetts and Mount Auburn, in fact the Cardinal maybe the least migratory land bird in Massachusetts not counting the Rock Pigeon and those pesky House Sparrows! The Northern Cardinal is also the State Bird of seven states: Illinois, Indiana, Kentucky, North Carolina, Ohio, Virginia and West Virginia; that’s more than any other species.